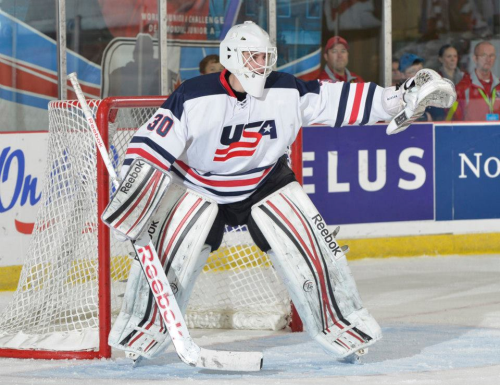 Eamon McAdam, a goalie scheduled to begin his freshman year at Penn State next season, has taken the latest step towards doing so as a 2013 NHL pick. On Tuesday morning, NHL Central Scouting Services released their midterm rankings, with McAdam - presently of the USHL's Waterloo Black Hawks - listed as the seventh-best North American goaltender ahead of June's NHL Entry Draft.

The ranking actually represents a mild step down for McAdam, as he was rated as the top USHL goaltender in Central Scouting's preliminary rankings, released in November. This time around, he's rated behind Cal Petersen, his Black Hawks teammate who is committed to Notre Dame. McAdam and Petersen, as you might expect, have split time virtually down the middle for Waterloo this season, with the Penn Stater carrying a 11-3-0 record, a 3.42 goals against average, an 0.896 save percentage, and two shutouts.

Recent results are decidedly mixed on what it means to be the seventh-best North American goaltender. In last year's draft, 24 goaltenders were selected. Fifteen were North American, with the seventh such player being Matt Murray of the OHL's Sault Ste. Marie Greyhounds. Murray was taken in the third round with the 83rd overall pick by the Pittsburgh Penguins. In 2011, widely considered a down year for goalies, nine North Americans were drafted of the 19 total, with Nathan Lieuwen, then of the WHL's Kootenay Ice, seventh. He was picked in the sixth round, 167th overall, by the Buffalo Sabres.

McAdam is easily the most posted-about Penn State recruit, but not without reason. In November, he helped Team USA to a gold medal at the World Junior A Challenge, while on September 29th, he played in the inaugural CCM/USA Hockey All-American Prospects Game, allowing three goals on 14 shots. McAdam was named the top goaltender at the Junior Club World Cup in Russia in August and helped the Black Hawks to a silver medal in the tournament.

Next Wednesday, January 23rd, he'll have a chance to improve his status, as he'll play in the second USHL/NHL Top Prospects Game in Muskegon, MI.

Notably, 2014 commit Bo Pellah, a defenseman now with the BCHL's Alberni Valley Bulldogs, is absent from the midterm rankings after being listed as a C skater in the preliminary rankings.
Posted by Kyle Rossi at 1:03 PM