What: NCAA Men vs. Vermont in the inaugural Philadelphia College Hockey Faceoff 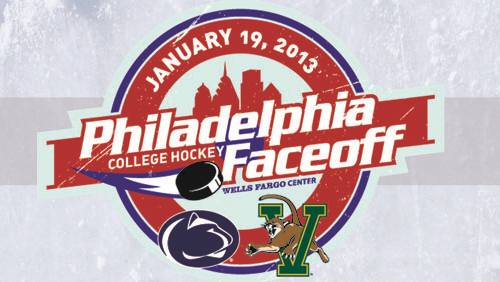 This is going to be fun.

With ticket sales reportedly exceeding 17,000 a sellout crowd in Pennsylvania's largest city, an unprecedented live television audience, and a puck drop just five hours after a nationally-televised Penguins-Flyers game on the same ice to open the lockout-shortened NHL season, Saturday night's Philadelphia College Hockey Faceoff will undoubtedly be a landmark game in the early history of Penn State's NCAA program.

Oh yeah, and PSU has a decent chance of winning too.

Since the 2012-2013 schedule was announced, I've claimed that Vermont was Penn State's best shot at a major-conference win (let's forget, for now, that we already have a major-conference win). The reasons are simple and well documented, but just to review:
Worst offseason in college hockey? Has to be up there. And it's not like they were starting from a fantastic position.

Nevertheless, it could be said that UVM has already exceeded expectations this season. At 6-11-4 (3-8-4 Hockey East), the team has already matched its overall and conference win totals from last season. The two most recent of those six wins came at the Catamount Cup, the holiday tournament they host at Gutterson Field House, when Vermont took the title by defeating current No. 17 Union - an opponent in common with PSU, of course - and Princeton. Despite a current three-game losing streak, including a home sweep by UMass-Lowell last weekend, Vermont seems to be trending up, as they're 3-4-2 since November 30th.

No, it's not exactly national championship-level stuff, but it's marked improvement from last season, and decidedly against the odds.


Chris McCarthy, a senior, and Jacob Fallon, a sophomore who transferred from Michigan, pace the Cats with six goals apiece, although Florida Panthers draft pick Connor Brickley is arguably the the team's best forward. Brickley missed 12 games after being cut with a skate blade against Boston University on November 16th, but returned last Friday, picking up two assists over the weekend. Colin Markison was also expected to be a key contributor this season, but like Brickley has missed most of the season, finally returning to the lineup last weekend for the first time since the season opener.

Vermont carries three NHL selections in all, and the other two are defensemen, Michael Paliotta (Chicago, third round, 2011) and Nick Luukko (Philadelphia, sixth round, 2010). Luukko, who leads the team's blueliners in points with seven, is the son of Peter Luukko, the president of Comcast Spectacor and also of the Flyers. Just in case you were wondering why Penn State ended up playing Vermont in this game, instead of nearby Princeton or anyone else. Behind those guys will likely be goaltender Brody Hoffman, who has capably picked up Madore's torch to the tune of a 2.95 goals against average.


One interesting footnote: Should Penn State senior forward Eric Steinour play on Saturday, it will actually be his second time opposing the Catamounts. As a member of the U.S. World University Games team in 2011, he and the rest of the American side (which also included former Icer Tim O'Brien, as well as then-PSU head coach Scott Balboni as an assistant coach) played UVM in a pre-tournament exhibition on December 29, 2010. Vermont won the game 7-1, with Brickley scoring twice and adding an assist - he had just been one of the final cuts from the U.S. World Junior Championships team that year, explaining some possible issues with the Team USA crest. Current captain H.T. Lenz had a goal and an assist, and Tobias Nilsson-Roos was the other still-active player to score in the game.
Posted by Kyle Rossi at 2:06 AM