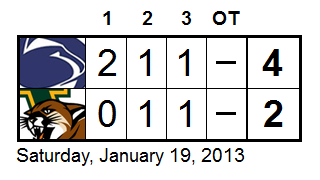 In front of an electric sellout crowd of 19,529 at Philadelphia's Wells Fargo Center and a sizable television audience on The Comcast Network, Penn State notched yet another landmark win in its early NCAA history, 4-2 over Vermont (6-12-4, 3-8-4 Hockey East) Saturday night.

The Nittany Lions now have an official NCAA record of 9-12-0, while improving to 11-14-0 in all games and 7-10-0 against NCAA Division I teams. Notably, PSU is 2-2-0 against major-conference teams, losing twice at Union on November 24th and 25th before topping Ohio State and now UVM in NHL arenas.

That Matt Skoff was central to this victory should be of little surprise. Since a jittery first two collegiate starts, the McKees Rocks, PA native has been exactly as advertised: a steady, consistently excellent goaltender that gives a first-year NCAA program a chance in every game he plays. Against the Catamounts, Skoff saved 34 of 36, many in truly spectacular, game-altering fashion. UVM freshman forward Robert Polesello, in particular, was robbed several times on his six shots.

Still, offense is needed to win games, and Penn State received plenty of it, from most of the usual sources.

After a quick start to the game with a healthy share of chances each way, Taylor Holstrom dented the scoreboard first 3:11 in, when he took a feed from Connor Varley and streaked down the ice before finishing the play by wristing through Brody Hoffman's five hole.

Scoring first is always important, of course, but especially so in PSU's case. The Nittany Lions are now 6-1-0 when scoring the first goal of the game, versus 3-11-0 when allowing the first goal. A more unusual trend was continued as well: (probably) the team's three biggest wins this season - at RIT on October 20th, versus Ohio State in Pittsburgh on December 29th and against Vermont on Saturday night - have all come in front of five-figure crowds in professional arenas and immediately following extremely ugly losses. The UVM triumph followed Tuesday's overtime defeat to NCAA Division III Neumann at the Ice Pavilion, just as RIT followed a shutout at the hands of DIII Buffalo State and Ohio State followed a 6-0 clunker against Robert Morris.

Following Holstrom's goal, Penn State also scored second, and third, just to be safe. Late in the first period, David Glen put his team up 2-0 after Justin Kirchhevel made a spectacular back-to-the-play pass from behind the goalline to the slot for a hard-charging Glen. Kirchhevel, in his second game back from a concussion, did the honors himself on the 3-0 goal, a wraparound effort from Tommy Olczyk that needed a review to ensure that the South Dakotan was able to stuff the puck all the way past the red.

Polesello did win one battle against Skoff during the contest, when he finished a pretty lateral passing play with a one-timer from between the circles while George Saad occupied the penalty box for a high sticking infraction. Brett Bruneteau swung the puck cross ice to defenseman Nick Luukko, who found Polesello from Skoff's right. Despite that blemish, the Nittany Lions' penalty kill had a good night, going 5-for-6, notably including the survival of consecutive penalties to Brian Dolan and Glen bridging the first intermission and overlapping by 17 seconds.

The Catamounts would get no closer than 3-1. Penn State successfully attacked and protected its lead for much of the third period, then added to it with 4:42 left. Dolan - a native of nearby Havertown, PA who came to Happy Valley before the NCAA announcement - got a shot from right point on net. It was saved, as was Holstrom's follow-up attempt, but Casey Bailey buried the play's second rebound. That goal rendered Kyle Mountain's reply snipe with 11 seconds remaining meaningless.

Guy Gadowsky, who now has more wins in his first NCAA season at Penn State than he did in his first seasons at Alaska and Princeton, will next lead his team into East Lansing, MI for a pair of games against future Big Ten rival Michigan State January 25th and 26th.

Here's the live blog from the historic win - unfortunately, my participation over much of the first half of the game was rather spotty due to internet issues, but my sincerest thanks are due to the commenters who picked up the torch while I was out of commission.