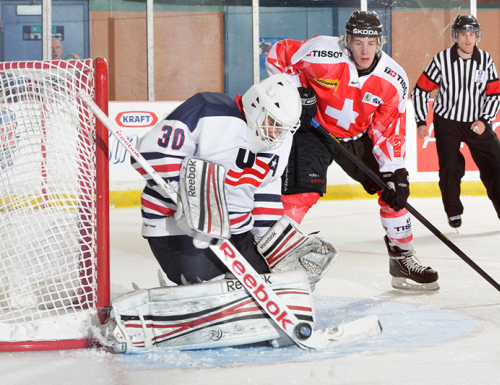 Penn State signee Eamon McAdam was one of 40 players and four goaltenders selected to compete in the second annual USHL/NHL Top Prospects Game.

The game, designed to showcase USHLers eligible for the 2013 NHL Entry Draft in June, will be played on January 23rd at L.C. Walker Arena in Muskegon, MI.


“The second USHL/NHL Top Prospects game promises to be an outstanding showcase of talent that USHL teams continue to develop for the next levels of hockey," commented USHL President and Commissioner Skip Prince [in the league's release]. "With so many of our young stars on the NHL watch list, and with the full attention of the National Hockey League, it promises to be a great night of hockey in Muskegon, and something all USHL fans should be anxious to see."

McAdam, who presently sports a 3.18 goals against average, a 0.907 save percentage and an 8-3-0 record for the third-place Waterloo Black Hawks will join four of his USHL teammates at the event, including forwards Taylor Cammarata and Justin Kloos (both headed to Minnesota), defenseman Ian McCoshen (Boston College), and goaltender Cal Petersen (Notre Dame).

It's the latest in a long string of honors for the Perkasie, PA native. In November, NHL Central Scouting named him the USHL's top goaltending prospect in their preliminary rankings, while earlier that month, he helped Team USA to a gold medal at the World Junior A Challenge. On September 29th, he played in the inaugural CCM/USA Hockey All-American Prospects Game - a similar showcase to the USHL game - and surrendered three goals on 14 shots. McAdam was named the top goaltender at the Junior Club World Cup in Russia in August and helped the Black Hawks to a silver medal in the tournament.

Freshman defenseman Mark Yanis and 2013 signee Zach Saar, a forward, played in last year's inaugural Top Prospects game. Yanis registered a +1 and two shots to help Team East to a 5-3 win over Team West, while Saar was a -3 with one shot for the westerners. Ultimately, the showcase nature of the event failed both players, as neither was selected in the 2012 NHL draft.
Posted by Kyle Rossi at 6:28 PM