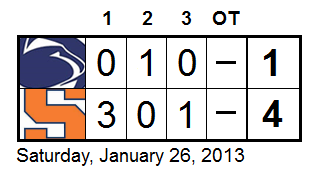 Former Supreme Court justice Potter Stewart once famously declared in Jacobellis v. Ohio (1964) that "I know it when I see it." Stewart, as many of you may know, was speaking about hardcore pornography, but he just as easily could have been referring to the progress of the 2012-2013 Nittany Lions women's hockey team.

That progress, much like pornography, sometimes evades clear definition. On Saturday afternoon against Syracuse (14-11-1, 8-3-1 CHA) and repeating a pattern seen earlier in the season, Penn State (7-16-1, 1-10-1 CHA) was outshot 55-15. Things like scoring chances and zone time aren't available, but I imagine the proportions would be similar. But that's rarely the whole story, and it certainly wasn't this time around.


The simple fact is this: but for a late empty-net goal by Julie Knerr of Syracuse, PSU outscored the Orange over the last 48:30 of the game. The 1-0 margin was thanks to Jill Holdcroft - Does she have a fan club? If so, I want in - the scrappy State High alumna. Holdcroft, in adding the icing to a fantastic weekend, took a feed from Shannon Yoxheimer after a nice play at the line, swooped in on SU goalie Jenesica Drinkwater, and scored on her own rebound after the initial shot was saved.

Syracuse, of course, won the game with three early goals. First Nicole Ferrara put back a Margot Scharfe rebound just as an early penalty expired, then Kallie Goodnough rippled twine off of a loose puck kicked back into the slot, and finally, Jacquie Greco made it 3-0 early on a power play one-timer. The Orange also built an early 9-0 shots lead during the scoring run.

Penn State's mental toughness won from that point on, though. Celine Whitlinger, who ended with 51 saves, shut the door the rest of the way. The defense generally reduced the quality of the chances by SU's talented top two lines (although Whitlinger was certainly spectacular when that wasn't the case). And PSU's offense, while not very prolific, did develop some opportunities.

The entire situation reminded me of two games earlier this season:
Do those things, or the fact that the Nittany Lions scored against Syracuse after being shut out in the first three games of the season series, look like much on the outside? No, not really. But for those paying close attention, they're the type of glimmers that show a young program in development. I'll spare the tired cliche about crawling before walking before running, but it's true. Take any winning team in sports, look back to before it was a winning team, and I guarantee you'll find a set of milestones and moments - sometimes isolated games within seasons, sometimes isolated plays within games - that indicated they were on the right track. I'm a skeptic by nature and don't always pick them up as they're happening, but I'm seeing them with Penn State women's hockey.

Here's the live blog for the latest step in the journey: