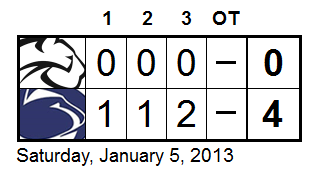 Josh Brandwene made massive changes to his team for Saturday's rematch with NCAA Division III Chatham - in the end, every player on the roster saw ice over the weekend - but the Nittany Lions (7-12-1, 1-8-1 CHA) rolled once again, this time by a deceptively close 4-0 score.

Considering Penn State's entire top line of Shannon Yoxheimer, Jess Desorcie and Taylor Gross, as well as lethal Hannah Hoenshell, got the night off, a duplicate of Friday's 10-0 romp would probably be asking too much. Still, other than the goal count, the gaudy stats remained in place against a Cougars team that only had 13 players available. PSU rifled 71 shots on Chatham goalie Kaitlynn Smith and allowed only 16 against Celine Whitlinger and Brooke Meyer (who closed out the final 7:26 of the game). Of those 16 CU shots, only four came from beneath the dots. Emily Laurenzi's 12-3 record in the faceoff circle led the way to a 30-11 advantage on a team level.

It was Laurenzi's line, which included Jenna Welch and Katie Zinn, that accounted for three of the four goals. Zinn opened things up 5:07 into the game by slipping a wrister through from the left wing circle. A Cougar defense that blocked 32 shots and Smith - despite issues controlling the puck all game long - kept Penn State at bay until late in the second period, when Madison Smiddy's point bomb on net was dropped by Smith, allowing Welch to push it home. PSU finally cracked things open in the final period when a turnover deep in the Chatham zone allowed Zinn and Welch in behind everyone, with the Canadian feeding the Texan for her second of the night. Jill Holdcroft closed things out 58 seconds after Welch's second with a putback of her own rebound.

The Nittany Lions will now hit the road for the next four games (closing out a stretch of ten away games in 12 bridging the semester break) beginning with games against the ECAC's Union Dutchwomen in Schenectady, NY next Friday and Saturday.