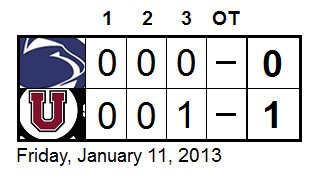 Despite a virtually superhuman effort from freshman goaltender Celine Whitlinger, who made a career-high 48 stops while filling in for an ill Nicole Paniccia, Union (6-11-3, 0-7-3 ECAC) scored a rebound goal with exactly four minutes remaining in regulation to escape with a 1-0 win over the Nittany Lions (7-13-1, 1-8-1 CHA).

Here's the recap from the winning side.

Stefanie Thomson puts away the game-winning goal with four minutes remaining in the third period as the Dutchwomen shutout the Nittany Lions 1-0 at Messa Rink Friday night.

Sheane Lundberg earns her first collegiate shut-out of her career in the win. Head Coach Claudia Asano Barcomb earns her sixth win of the season, a personal best in her six years with the program. Additionally, it is the first shutout since October 15, 2010. Alana Marcinko and Kate Gallagher combined for a shutout in a 3-0 win against Sacred Heart.

The Dutchwomen applied heavy pressure on Penn State's defense throughout the first period as Union tallied 20 shots on goal, a season-high for one period. Union had a great opportunity halfway through the first period as Courtney Turner slapped a pass to Thomson but the forward could not connect. Ashley Johnston also had a great opportunity as she cranked a slap shot towards net. The puck snuck by Celine Whitlinger through traffic but ricocheted off the crossbar. Penn State managed to escape the first period without conceding a goal as Whitlinger blocked all 20 shots.

While Union kept their offense momentum in the second stanza, Penn State nearly was able to get on the board. After a failed clearance, Hannah Hoenshell found herself one-on-one with Lundberg on her stick side but backhanded the puck wide. Once again, Hoenshell freed herself from the defense but then missed glove side of Lundberg. Jenna Welch corralled the puck and made a shot but it was off the mark as well.

The Dutchwomen had their chances on the power play in the third period. Christine Valente redirected a shot from Alex Tancrell-Fontaine that was on target. However, Whitlinger continued to thwart the Union offense. Johnston nearly put the Dutchwomen on top with a slap shot from the point in which the shot was reviewed for a goal but the officials waved it off.

Union continued to seek the go-ahead goal as the Dutchwomen outshot the Nittany Lions in every period. Thomson was able to provide the lone goal in the game as she put away the loose puck in a scrum in front of the Penn State net. Haley Welch flung the puck towards the net as Whitlinger made the initial save. Rhianna Kurio and Valente had shots as well in which the netminder tacked on two more saves. The puck then found Thomson in which the junior was able to slip one by Whitlinger for the win.

Union finished with 49 shots on target, a season-high while Penn State had 14 on net. The last time Union eclipsed the 40-shot mark was October 8, 2011 against Sacred Heart. The Dutchwomen also had the edge in faceoffs with a 25-20 advantage.

Penn State and Union will see each other again in a rematch tomorrow at Messa Rink, as the puck will drop at 4:00 p.m.
Posted by Kyle Rossi at 11:00 PM