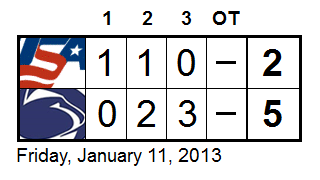 However, it was a couple of future Big Ten opponents that had the highly-physical game's first (and second) word. Midway through the first period, and capping a slow start from the Nittany Lions, future Minnesota Golden Gopher Hudson Fasching drove hard on PSU goalie Matt Skoff. Skoff was up to that challenge, but the rebound popped back in front of a gaping cage, where Connor Clifton tapped in for a 1-0 NTDP lead. Just 37 seconds into the second period, J.T. Compher, who will play at Michigan next year, beat Skoff with a wicked snipe from the right-wing circle on the power play.


The last word, though, is the one that counts, and following Compher's goal, the words all belonged to the Nittany Lions.

George Saad got things started with a gritty answer to Compher 1:51 later, and PSU's normally anemic power play put the blue and white in front for good. First, at the tail end of a full two-minute 5-on-3, Kenny Brooks put home a rebound following a nice David Glen-to-Curtis Loik passing play resulted in the initial shot. Joe Lordo's blast through traffic from above the right-wing circle on a third-period power play.

Tommy Olczyk added insurance with 6:48 left after an outstanding play by Michael McDonagh to win a puck battle in the corner before getting it in front to the captain, and Brooks added a late empty-netter from the opposite side of center.

Skoff, for his part, turned in an outstanding game, ending with 47 saves on 49 shots. He was helped by a defense that only had five players dressed, including Mark Yanis, who played well in his first action since fracturing his ankle on November 3rd.

The two teams will face off again Saturday night at 7:30 p.m. in the Ice Pavilion.