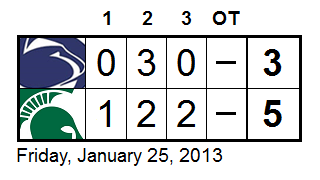 Once again, my sincerest apologies for cancelling the live blog for this game at the last second. Essentially, the story is that I wasn't 100 percent positive that it was going to be streamed via Michigan State's All-Access channel (video wasn't mentioned in MSU's pregame release). There was video as it turned out, but it didn't come on until literally about 10 seconds before puck drop - or five minutes after I decided to switch over to the women's game at Syracuse so as not to be caught empty handed on a full Friday night of hockey. I had to make a quick decision, and given my preference for the men's game this time around, hindsight says it was the wrong one. It happens.

I did manage to catch a good chunk of the men during the women's intermissions and following the conclusion of that game, including the final 10 minutes and the wild second period stretch that saw three goals scored in 1:34. So I don't think I'm completely blind when I say that the Nittany Lions (11-15-0 all games, 9-13-0 NCAA, 7-11-0 NCAA DI) played well enough to win, especially after a tenative first period. Had it not been for Connor Varley's checking from behind major on Anthony Hayes with 8:36 left in a tie game that led to Tanner Sorenson's game-winning one-timer, who knows what would have happened. The good news is that the typical college hockey weekend, and this is one of those, involves a rematch.

I'm going to break from my usual victor-spoils rules and use Stefan Kubus' recap from MIHockeyNow.com instead of the one from MSUSpartans.com, just because I thought Kubus did an exceptional job in describing things. It's still MSU-centric, so I'm counting it.

A bounce-back game for Michigan State was just what the doctor ordered following their disappointing Tuesday night loss to the NTDP U-18 squad.

The Spartans defeated Penn State, 5-3, on goals by Mike Ferrantino (Plymouth), Kevin Walrod, Greg Wolfe (Canton) and a pair by Tanner Sorenson. Will Yanakeff (Jerome) made 27 saves in the win, as freshman Jake Hildebrand had the night off.

Ferrantino, a freshman forward, got things going in rather slick fashion for the Spartans. Following some great work along the boards in the Penn State zone by linemates Ryan Keller and Anthony Hayes, Ferrantino picked up a loose puck down low on the right side, made a move to the backhand, attacked the slot and put the puck past goaltender Matthew Skoff to make it 1-0 at the 12:42 mark.

“It seems like when we scored the first goal, we really got a boost from that, so it was really nice tonight to get the first one,” Ferrantino said of his goal. “It seemed to really energize us for the rest of the first period.”

Later, with 4:54 to go in the first frame, Penn State captain Tommy Olczyk – son of former NHL’er and current TV analyst Ed Olczyk – broke in on Yanakeff all alone only to get robbed.

The first period – a very strong one for the Green and White – ended with MSU up 1-0, holding a 12-7 shot advantage, as well.

The second period was a wild one for both sides, as five goals were scored, with three of them coming within three minutes of each other.

First, it was Michigan State, as sophomore defenseman RJ Boyd sprung Sorenson with a long stretch pass from blue line to blue line. Sorenson went in and fired a shot off the inside of the crossbar and down for a 2-0 lead 6:55 into the period.

“I was kind of cherry picking, slow to back check because they were all changing,” Sorenson said of his goal. “And then I cut through the middle and yelled, “Boyd,” and Boyd saw me, made a great play to me, and then I just kind of took off and had a breakaway. But no, that was a great play by Boyd.”

Just 1:30 after the Sorenson tally, Olczyk skated behind the MSU defense on the left side and, this time, he capitalized on his chance, pulling the Nittany Lions back within one on a shorthanded marker.


The game calmed down for about six minutes until Taylor Holstrom broke in on Yanakeff off a pass from Max Gardiner and roofed a backhand past Skoff to make it a 2-2 game at the 14:38 mark.

Next in the parade, it was Walrod who scored a very similar goal to Olczyk’s, letting a far-side wrister go from the top of the right circle that beat Skoff over the blocker to regain the 3-2 lead for his Spartan squad.

And 14 seconds later, Penn State tied it up at three aside on a goal that freshman David Glen found in a crease scramble to tap in the gaping net.

That’s the way the game stood through 40 minutes, with MSU holding a slight, 23-20 shot advantage.

In the third, a huge Connor Varley hit on Hayes from behind resulted in an ejection and five-minute power play for the Spartans.

After some sharp puck movement in the Penn State zone, Walsh walked down the middle from the point, faked a shot and dished a short, nifty backhand pass to Sorenson who unleashed a snap shot from the inside top of the left circle to put MSU up 4-3 with five minutes to go in the game.

“We knew we had a long power play, so we had time to be calm and just work it,” Sorenson said of his second tally. “Wally made a good play to Walsh in the slot, then Walsh faked a shot and gave it to me. I knew I had to get it off quick because the goalie was down and it felt great.”

Wolfe capped things off with 15.9 seconds remaining in the game, depositing the puck into an empty net. Although it wasn’t quite the goal he had been looking to score lately, the MSU captain wasn’t complaining.

“For me, I guess it was more of a sense of relief,” Wolfe said of his empty-netter with a laugh. “Obviously, this year has been kind of up and down so everyone was just working it really hard. It was just a good team building; it just felt good all around. We’ve had so many disappointments lately, it was good to finally just break that streak and feel good for a change going into the locker room.”

The second game between the two schools is set for 6:05 p.m. Saturday evening again at Munn Ice Arena.

Notes: Attendance: 5,605… With David Bondra and Brent Darnell (upper-body) hurt, along with Matt Berry serving a DQ penalty, defenseman Nickolas Gatt saw time on forward for the first time ever in his playing career… In a nice touch, MSU dressed recently-retired defenseman Branden Carney as an honorary captain to sit on the bench with the team.
Posted by Kyle Rossi at 6:30 PM