Something I learned this past weekend: the first game in the history of Mercyhurst women's hockey was played against the Lady Icers on October 9, 1999. Unfortunately, I think the Collegian passed on covering it to run one of 38,000 PSU-Iowa football articles that week (fall break didn't help either), so this box score might be the only online trace of it. That's just as well - it wasn't really a pretty result for us.

By the way, that's two consecutive women's opponents mentioning their history with the Lady Icers in their game notes, if you're scoring at home. Just saying.

Because of the out-of-sync timing between my posts and theirs, I never get enough of a chance to toss some love to the other great PSU hockey bloggers out there, including IcersGuy and Mary Clarke of BSD and VBR, respectively. Because of the aforementioned timing issue (their recaps go up later in the week), these posts are actually their thoughts on the Nittany Lions' weekend at then-No. 8 Union November 24th and 25th. Know what though? That one was better anyway.

Get to know their stuff, and follow them on Twitter too (@hey_pono for IcersGuy, @marycclarke for Mary Clarke). Because you're not a fully-informed fan if you're only listening to one voice.

Yep, it's a commercial for Penn State's game with Vermont in Philly on January 19th. Cheeseball? Sure. But in a fun way. And the Nittany Lion does the ear thing he does right at the end, so it's all good.

Even though he didn't move directly from Penn State's commit list to major junior, I suppose Thomas Welsh can be considered our first CHL defection. I've largely gotten over his decommitment after he wasn't able to "come to terms" (his awkward choice of words that may or may not indicate that he wasn't looking at PSU for the 'right' reasons) with the school. I fully expect this to be the last time I ever mention him now that he's officially gone for good. However, because Welsh's relatives continue to email me articles, as if I have any interest whatsoever in promoting him at this point... 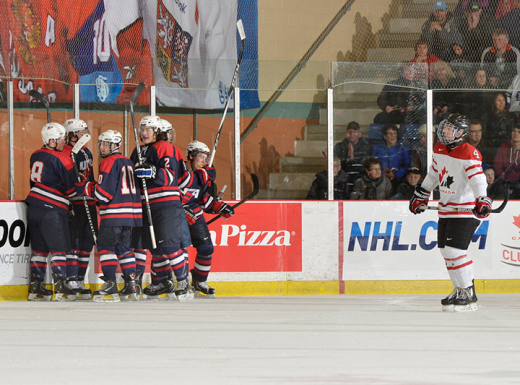 ...here's a photo of Welsh getting scored on by Team USA at the World Junior A Challenge last month. I'm not sure which of the nine goals scored by Eamon McAdam's teammates in the game is represented here, sorry.

Now that the ACHA has our attention, here's how future opponent Oklahoma (February 15th and 16th) is looking for the spring semester. The Sooners' trip to the Ice Pavilion will actually be their second NCAA DI series of the season, as they play Alabama-Huntsville on January 11th and 12th. So basically, the Icers could never get any DI games, and as soon as they depart the ACHA, teams start getting four per season.

Remember when PSU was unbeaten against the ACHA as an NCAA program? Those were good times. StP has some evidence in support of that, including video of four of the Nittany Lions' eight goals Friday night.

Former PSU women's target Mika Nervick, a Minnesota high schooler - man, do we hit Minnesota hard on the women's side - signed with Quinnipiac.

I do have to say that it's a great testament to the hockey fans of Glens Falls, NY that the team draws more than six people per game (3,514 so far this year, well below the AHL average of 5,313), given that they've basically been used as a place to stash the team for five years while this project gets done.

Guy Gadowsky is quoted heavily in this article, mostly dealing with the development of minor hockey in his former location. Undoubtedly, he's trying to build the same sort of depth of organization in Central PA.

Picture Gary Bettman on the couch of a fighter/shrink...
(Toronto Globe and Mail)

Speaking of Princeton-era Gadowsky, here's a great feature on Kings enforcer Kevin Westgarth, one of the players he coached at PU. It's so bizarre to me that between Westgarth and George Parros (who was a Tiger pre-Gadowsky), Princeton generates not only a couple of the NHL's most intelligent players, but guys who also happen to be able to throw hands.

Former Icer Josh Daley and his teammates at UW-Stevens Point took down UW-Eau Claire, the third-ranked team in NCAA Division III, in overtime Saturday night. The Pointers are 5-5-1 so far, with Daley playing in five of those games and posting an assist.

Next season, the Icers' old conference will feature Delaware, Rhode Island, Rutgers, Stony Brook, West Chester, and now LVC. It's great to see the league develop a little bit of depth after PSU's final ESCHL season (2010-2011) saw only UD and URI join the Icers as solid programs, with complete wastes of ACHA D1 status Robert Morris and WCU holding down the other two spots (but not doing much else of value).
Posted by Kyle Rossi at 3:44 AM