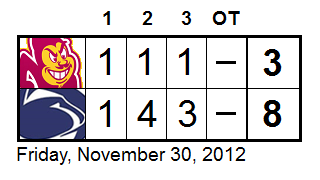 Hopefully by now, you guys know how greatly I despite mailing in one of these posts by copy/pasting a press release, as I've done this time for Penn State's win over Arizona State to improve to 7-5-0 (5-4-0 NCAA DI). However, the unfortunate reality is that as just one guy, I'm not able to do something like a) Be in Erie, PA for the Penn State-Mercyhurst women's game Friday night at 7:00 p.m., b) Drive home to Medina, OH after the game, c) Do what I need to do on this blog the way I like to do it, d) Get enough sleep to avoid dying on I-90 and e) Be back in Erie, PA for a 2:00 p.m. puck drop Saturday. In that sequence, c) is what has to suffer, and so here we are.

The bright side? Because Saturday's women's game isn't directly opposite Saturday night's PSU-ASU series closer, I should be able to address both adequately. Also, at least I'm not getting paid to do it while slapping "From Staff Reports" on top. So there's that.

Arizona State took a 1-0 first-period advantage before the Nittany Lions tallied four straight markers, including three in the second stanza, as they skated to a 4-1 lead. The Sun Devils, who compete in the American Collegiate Hockey Association, scored once more in the second to halve the lead, but Penn State responded with a 4-1 run to end the game.

Penn State outshot the Sun Devils by a 52-27 margin and finished 3-for-3 on the power play. Arizona State was 0-for-1 with the man advantage. Joe D'Elia started for the Sun Devils, allowing four goals on 19 shots, while Kyle Dietriech surrendered four goals on 33 attempts.

Arizona State's Dan Styrna opened the scoring at 12:20 of the first period, but Penn State responded with four straight goals. Freshman defenseman Luke Juha (Mississauga, Ont.) knotted the game at 1-1 with a power-play tally with 1:15 left in the stanza. Lordo passed to McDonagh, who skated down the right-wing boards before sliding a backdoor pass to Juha.

Sophomore forward Tommy Olczyk (Long Grove, Ill.) put the Nittany Lions ahead, 2-1, at 2:01 of the second frame. McDonagh passed to Longo, whose initial shot was stopped, but Olczyk knocked the rebound into the net.

Arizona State's Faiz Khan scored with 13:27 left in the second period to make it a 4-2 game. After Glen tallied a power-play marker with 15 seconds left in the frame, Arizona State cut the lead to 5-3 with Styrna's second goal at 2:26 of the third stanza.

Longo gave the Nittany Lions a 6-3 lead with 13:44 left in the game after his shot from the right circle found the back of the net. Freshman forward Casey Bailey (Anchorage, Alaska) and sophomore forward Max Gardiner (Deephaven, Minn.) collected assists on the play.

At 11:09 of the final frame, Eric Steinour (Carlisle, Pa.) gave Penn State a 7-3 advantage. Sophomore forward Jacob Friedman (West Bloomfield, Mich.) passed to Steinour, who deked to his backhand before slipping the puck past Dietriech. Lordo also garnered an assist on the play.

While on the power play, Glen capped off the evening with his third goal with 6:04 remaining. With the faceoff to the right of Dietriech, Glen won the draw back to Jensen, who took a shot from the point that Glen redirected into the back of the net.

Penn State and Arizona State will conclude their two-game series Saturday, Dec. 1 at 7:30 p.m.
Posted by Kyle Rossi at 1:57 AM