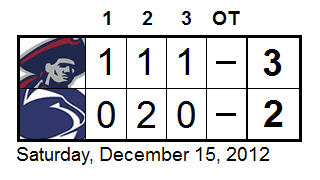 I realize that I've done an atrocious job on this blog over the last two weeks, and I'm truly sorry about that. The good news is that my grad school finals are now all complete, as is my only family Christmas party that will conflict with hockey. So hopefully, this will be my last mailed-in (or skipped altogether) post, as the Nittany Lions fell to 7-8-0 according to the completely substance-free official tabulation, but 8-9-0 in all games and 5-7-0 against NCAA Division I competition.

University Park, Pa. - The Robert Morris University men's ice hockey team took to the ice for their only contest of the weekend as the Colonials travelled to Penn State for the first-ever meeting between the two teams. In a hard-hitting match that pitted the two newest NCAA Division I programs, RMU would prevail by a score of 3-2.

At 12:07 of the first period, the Colonials would net the first goal of the game. After cycling the puck down low in the offensive zone, sophomore Jeff Jones (Revelstoke, British Columbia / Merritt Centennials) would gather the loose puck behind the net and send a pass to the slot. Waiting in the slot was freshman defenseman Chase Golightly (Temecula, Calif. / Prince George Spruce Kings) would slap home his second goal of the season. Also assisting on the play would be freshman Zac Lynch (Pittsburgh, Pa. / Bay State Breakers) who picked up his third assist of the season.

In the second period, the Nittany Lions scored twice in a 1:52 span as they took a 2-1 lead. Olczyk tied the game at 1-1 when he tipped defenseman Luke Juha's (Mississauga, Ont.) point shot at 1:33 of the stanza. Senior defenseman Brian Dolan (Havertown, Pa.) tallied his first point as a Nittany Lion on the play.

With 16:35 left in the frame, Loik scored on the rebound for his fourth goal of the season. Freshman forward David Glen (Fort Saskatchewan, Alta.) took a low shot from the left circle that was stopped, but Loik found the loose puck and slipped it through the five-hole.

After killing off a Penn State power play, Robert Morris would go on the offensive and tie the game, 2-2. A pass coming from behind the net by junior Colin South (Sewickley, Pa. / Bay State Breakers) would find the stick of senior captain Brendan Jamison (Pittsburgh, Pa. / Jersey Hitmen) as he would walk in to a wrist shot from the top of the circle. While the initial shot would be saved, Jones would corral the rebound and flick the loose puck past the goaltender for his second goal of the season.

With 8:11 remaining in the third period, Robert Morris would regain the lead as assistant captain Tyler Hinds (Orleans, Ontario / Nepean Raiders) would fire home his first goal of the season. After battling along the boards in the defensive zone, Hinds would pick up the puck after it was chipped out of the zone by Matt Cope (Lakewood, Colo. / Wenatchee Wild) and carried it in to the offensive zone for the game-winning goal. The Colonials would withstand a late Penn State surge as the team held on for the 3-2 victory.

Senior Eric Levine (Wheeling, Ill. / Pembroke Lumber Kings) picked up the win while making 38 saves. Over the past six games in which Levine has started, the goaltender holds a record of 4-0-2 and has made at least 30 saves in five of those six contests. With two points in the game, Jones recorded his fourth multi-point game of his career and second of the season. Hinds’game-winning goal was the first goal for the defenseman since the Atlantic Hockey Quarterfinals against Niagara on March 10, 2012.

The Colonials will have the next week off before returning to Pittsburgh, Pa. to take part in the first-ever Three Rivers Classic. The two-day event will see RMU take on Penn State for the second-consecutive game at 4:30 p.m. on Friday, Dec. 28. Following that will be a match-up of Ohio State and #5 Miami. On Saturday, Dec. 29, the consolation game will be played at 4:30 p.m. and the first-ever champion of the Three Rivers Classic will be crowned that night which a championship game faceoff scheduled for 7:30 p.m.

Tickets for either day are available at ticketmaster.com, all Ticketmaster outlets, the Dick’s Sporting Goods Box Office at CONSOL Energy Center and charge by phone at 800-745-3000.
Posted by Kyle Rossi at 6:34 AM