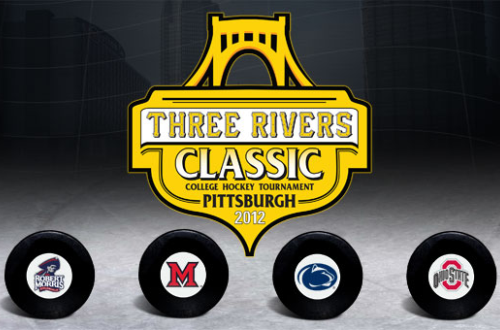 
Penn State has had it easy in starting NCAA Division I hockey.

Name recognition, huge university, established history of athletic success and people who follow that success, built-in major-conference affiliation... oh, and that nine-figure donation and the brand-new arena that came with it.

Back in the Icers days, we had to go with parentheticals when discussing Robert Morris (PA), as unrelated Robert Morris (IL) also has ACHA D1 hockey. Few were likely to notice if you got it backwards. RMU is the sort of school that inspires lines like "how good that Robert Morris fella is if he beat the Nits all by himself" from PSU outlets following the Colonials' 3-2 win at the Ice Pavilion two weeks ago, largely because nobody knows what else to say about them. Maybe some of you know them as a conference rival of the women's program. Or maybe you're only aware of them because their basketball games against Fairleigh Dickinson get a couple seconds of fame during every eighth cycle of the ESPN ticker (although the Colonials did take Villanova to overtime as a 15 seed in the 2010 NCAA Tournament).

They did not get a nine-figure donation to start an NCAA program. Instead, they purchased an existing off-campus rink in preparation for the move, now called 84 Lumber Arena. It's a 1,200-seat rink that looks like a lot of 1,200 seat rinks all over the country.

In other words, they've had to build a program the hard way: slowly, and by winning repeatedly until people have the program's identity down. There have been high-profile, respect-earning upsets, like a January 7, 2007 stunning of second-ranked Notre Dame, an October 12, 2007 victory over No. 8 Boston University, a sweep of top-ranked Miami on January 8 and 10, 2010 and wins over Ohio State on October 15, 2010 as well as this year in a win-tie home-and-home with the Buckeyes on December 7th and 8th (file those latter two opponents away for Saturday). There has also been a concerted effort to get on the big stage of Pittsburgh's NHL arena and in front of large numbers of locals whenever possible, most notably through the Pittsburgh College Hockey Showcase - sort of a forerunner to this weekend's event, which included a mess of an Icers-ACHA RMU (PA) exhibition in 2010 - and a game with RIT that drew 6,957 in the build-up to the 2011 Winter Classic.

Beyond the highly-specialized origins of the two universities (Pittsburgh School of Accountancy, meet Farmers' High School), that's sort of where the two newest NCAA DI programs intersect. Both have an interest in developing western Pennsylvania's college hockey presence because in the long run, it benefits both programs.


Say hello to the Three Rivers Classic. And, hopefully, get to know it pretty well, because the idea is for it to become an annual staple, featuring Penn State and Robert Morris each time around (Boston College and Bowling Green have already been booked as the other half of the next year's iteration).

I've sort of poor-mouthed RMU (7-4-2, 4-3-1 AHA) a little, but make no mistake, they're a quality team with a quality coach (in fact, I openly endorsed Derek Schooley for the PSU job). The Nittany Lions, as mentioned, saw that firsthand two weeks ago, when goaltender Eric Levine made 38 saves in the Colonials' victory. Defenseman Tyler Hinds scored the third-period winner, but would have been one of the game's stars even without that distinction.


"He's been a warrior the last three games against Ohio State and Penn State," Schooley said. "He's won every one of his battles, he's competed, he's jumped up into the offense and he's been tremendous blocking shots."

"Tyler Hinds has taken his game to another level. I can't say enough about how well he's been playing."

Miami and Ohio State, of course, are the other two teams in the tournament and will face off in Friday's nightcap. Penn State will then take on whichever of the two teams matches the Nittany Lions' result during the tournament's second day.

Even though Miami (11-3-4, 8-3-3 CCHA) is the fifth-ranked team in the country, tied for first in the CCHA and has been to the last seven NCAA tournaments, it's probably safe to say that most Penn Staters want to see Ohio State (7-6-5, 6-3-3 CCHA) on Saturday in what would be PSU's first matchup with a future Big Ten opponent. And actually, there is some good news on that front, provided the Nittany Lions are able to get revenge on RMU.


The RedHawks will be without a pair of standout freshmen - forwards Riley Barber and Sean Kuraly - for the tournament, as both are with Team USA for the IIHF World U20 Championships in Ufa, Russia. Barber, Miami's leading scorer this year with eight goals and 14 assists (he's the only freshman in the country with more points per game than David Glen), is a product of the U.S. National Team Development Program, and was a sixth-round pick of the Washington Capitals in June. Kuraly, selected in the fifth round by the San Jose Sharks in 2011, has scored three times this year.

That's not to say that MU is completely devoid of talent. The RedHawks, former doormats that have become one of the nation's elite programs in the last decade under Enrico Blasi, remain a young - 11 freshmen, six seniors - and very talented team including three NHL draftees (forwards Curtis McKenzie, Blake Coleman and Jimmy Mullin) and Austin Czarnik, who missed out on the draft but is the RedHawks' top remaining scorer and has represented the U.S. internationally on several occasions, including with last year's WJC team. Another forward, Marc Hagel, transferred to Oxford from Princeton, where he played for Guy Gadowsky from 2008-2011 (Hagel's brother Kyle also played at Princeton). If you haven't figured it out, Miami forwards tend to come in waves, not lines, so while the losses of Barber and Kuraly will sting, they are unlikely to cripple.

Blasi is also noted for his goalie rotations, and this season has been no different, with freshmen Ryan McKay and Jay Williams splitting the starts (other than during a stretch where McKay was injured earlier this year). McKay has the better numbers of the two, with a ridiculous 0.58 goals against average and a 0.979 save percentage but Williams, a former goalie partner of 2013 signee Eamon McAdam on the USHL's Waterloo Black Hawks, isn't exactly terrible either. In fact, Miami has gone 11 consecutive games without allowing more than two goals.


Head coach or not, OSU is one of the nation's best defensive teams, holding opponents to 1.94 goals per game, the NCAA's sixth-best mark. Senior Brady Hjelle, who transferred from Minnesota-Duluth just before their 2010-2011 national championship season (whoops) backs that effort with a 1.46 goals against average and a 0.951 save percentage, good for third and second in the nation, respectively. If something happens to Hjelle, the backup is star recruit Collin Olson, an NTDP product.

Protecting the goaltenders are a pair of gigantic defensemen, including freshman Craig Dalrymple - 6'5", 212 pounds - who leads the team's blueliners with five points and the team as a whole with a +9 rating. Sophomore Justin DaSilva - 6'6", 225 pounds - is even bigger and leads the Buckeyes with 33 blocked shots. Those who figure out how to deal with their reach and physicality still have to deal with Devils draft pick Curtis Gedig, who is more compact at 6'3", 200 pounds.

A pair of Ottawa Senators draftees, Ryan Dzingel and Max McCormick, lead OSU's offense with six goals each. Dzingel, who recently had an eight-game scoring streak snapped against Miami, is a native of Wheaton, IL. McCormick had no such issue against the RedHawks, scoring in a 3-1 loss to MU two weeks ago. The teams tied 1-1 in the first game of the series played in Columbus.

Beyond the fact that Miami-Ohio State, Penn State-Robert Morris and Robert Morris-Ohio State games have already taken place this season, stout defense and goaltending is the obvious recurring theme. Penn State's success and/or failure in Pittsburgh will likely be determined by the ability of a thin defense group and goalies Matt Skoff (who, remember, once signed a National Letter of Intent with Ohio State) and P.J. Musico to play at that level - as well as the ability of the offense to take what it's given in a way not seen in that game against the Colonials on the 15th.
Posted by Kyle Rossi at 6:01 PM