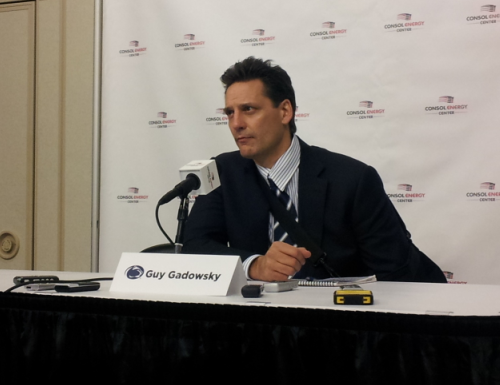 
Coach, can you speak a little bit about the play of Matt Skoff, obviously coming in late and giving you some good minutes under trying circumstances?

Yeah, Skoffer played very well. We had predetermined that he will get the start tomorrow. Unfortunately, he had to come in today, but he was strong when he came in. Certainly, you’re not going to win a lot of games scoring zero goals. You’ve got to give Robert Morris credit, they played a very good game and they finished. They made plays, so give them credit.

What was the thought process in making the change after the first period?

Performance [laughter]. You know, I was thinking of making it right after the third [goal], but I thought it wasn’t fair to Skoffer actually... there wasn’t a lot of time left, and I thought that it would... instead of getting him in cold, it would give him a little time to prepare in between periods. P.J. is a great kid, he works hard, he’s had great games. Some nights, you just don’t have it.

Those three goals at the end of the first period, what did they do, not just on the scoreboard, but from a momentum perspective?

Like I said, you’re not going to win many games not scoring any goals, but certainly, we put ourselves in a deep hole. It could have been a little different, we had a breakaway - David Glen had a breakaway, I think on the power play. We score that and a couple of them stay out, it’s a different ballgame, but that’s ifs and buts. Bottom line is we put ourselves in a hole and we couldn’t come out of it.

How did you feel the atmosphere was?

That’s why I’m disappointed right now, because I was very curious to see... everywhere we’ve been, there’s been such great alumni at Penn State. Penn State is... I love Penn State. I love it. The student body, the alumni are unbelievable. I couldn’t wait to come here and see how it is. And the atmosphere was tremendous, I mean tremendous. I took a look when the first period wasn’t done yet, and it was phenomenal. You see a lot of blue and white. That’s why I’m disappointed, I would have loved for them to have seen a much better outcome from our standpoint. I tell you what, to me and the players, to come here, it’s a great building to play in, but to see the reception and the Penn Staters here, it’s really motivating. I think we’re all disappointed that that’s the result, for them, and I hope they give us another chance.

When you are in the early stages of what many people presume will be a rivalry, with a score like this, how can you use that going forward?

Do you have a problem with the game misconduct call late in the second period?

You mentioned last night that you only had eight players [present to travel with the team]. Would you blame that for some of the slow start today?

No, I don’t. Everyone had travel problems. Everybody’s playing on the same ice. Everybody had the same break. I certainly don’t think we handled it well, but all in all... I don’t have the final stats page, but they finished and we didn’t. It’s not like they came out and got 11 shots on goal for the game. We didn’t finish. We weren’t sharp. They finished. They’re either that much better right now, or that much more prepared. But hey, all teams here have the same travel.
Posted by Kyle Rossi at 8:16 PM