As I'm sure most of you know, I take great issue with the handling (or, more to the point, lack thereof) of Penn State hockey history through official outlets. So I can't help but laugh at the irony when a small piece of that history is acknowledged, yet part of me wishes it wasn't.

In case you're skimming, note the date there: November 5, 2011. Several hours before the game, Tim Curley and Gary Schultz were charged in relation to the Jerry Sandusky scandal (Sandusky himself was indicted the day before and arrested that day).

I was at the Ice Pavilion to cover the match, and rather than enjoy what really was a fantastic comeback (Steve Edgeworth scored the tying goal on the power play, have to work him in for a mention since he no longer exists on any official level), I spent most of it wrestling with a question: should I ask Guy Gadowsky about the situation after the game? Anyone who fully understood where the next 13 months would take us, to be clear, is lying. But still, it was pretty obvious that this was a big deal - I mean, Gadowsky's boss had just been very publicly implicated in a child sex abuse scandal. How many times has that happened to you? I stood to gain something as well, since as the first person to connect the whole thing to hockey, that post probably would have received a fair amount of traffic.
﻿﻿

That night, I decided that I was a blogger, not a journalist. I didn't ask, and I'm glad I arrived at that decision. Gadowsky's a smart guy and undoubtedly would have refused comment, meaning that I would have trashed a fair amount of goodwill points for no good reason beyond journalistic principle and page clicks worth about $16,000 in internet money.

So that's what Fredonia State means to me - that internal struggle and, in my pre-video camera, pre-Quality Inn wifi days, joylessly transcribing quotes at a Starbucks the next morning while taking frequent breaks to attempt to figure out what, exactly, the whole thing meant for Joe Paterno.

Needless to say, six weeks later than planned - thanks so much, Hurricane Sandy - I'm ready to re-wire my associations with Tuesday night's deceptively important return trip by the Icers Nittany Lions to Fredonia's Steele Hall at 7:00 p.m.

While this season isn't about wins and losses, the odd weeknight night road game comes at a vital time in the schedule. Somewhat quietly, Penn State (7-8-0, 5-6-0 NCAA DI) has lost six of eight. The last three in that string have been particularly brutal: a home loss to ACHA team Arizona State and two losses at Holy Cross, one despite holding a two-goal lead with 5:17 remaining, the other a 4-1 disaster that ended with the home team's student broadcasters questioning the maturity of the Nittany Lions and their fans.

A tough home game with Robert Morris awaits on Saturday, followed by a rematch with the Colonials on December 28th at the Three Rivers Classic in Pittsburgh, with either Ohio State or Miami on tap for the tournament's second day. Simply put, there's not a lot of breathing room built into the schedule, which adds a great deal of importance to Tuesday night's clash as a "get healthy" type situation. However, according to assistant coach Matt Lindsay, and as reported by StateCollege.com's Ben Jones, the losing hasn't hurt the program's progress.


"It's a learning experience," assistant coach Matt Lindsay said Monday following practice. "You've got a lot of guys playing their first year of Division I college hockey, so again it's an experience.

"I don't know that it feels like a grind at all. With exams coming up and a lot of hockey in a short amount of time, I think our guys have so much energy and enthusiasm being our first year that I don't think that, at least mentally, that the grind comes into play. I think they're just excited about playing the next game and showing people what they've got. I don't get the sense at all that they're struggling to get up for games by any stretch."

Given Lindsay's track record, it's pretty hard to question his assessment. And given the admittedly shorter track record of his Penn State team, there's no reason to think things are an issue at this point - guys like Curtis Loik and Tommy Olczyk work hard regardless of game situations, so why wouldn't that extend to the bigger picture? 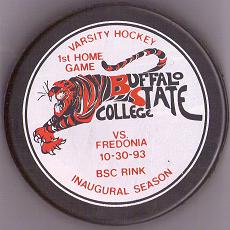 Believe it or not, this isn't the first time this season the Blue Devils have hosted a team in its first NCAA year of a transition from ACHA Division 1. Canton, 7-3 losers to the Icers at the 2010 ACHA championships, lost to Fredonia 5-2 in their first NCAA Division III game on October 19th. According to a puck I bought on eBay a while back, former Icers ICHL rival and current-season Nittany Lions opponent Buffalo State played their first home game after elevating to DIII against the Devils as well. I guess Fredonia likes their name in other people's record books. Hey, whatever it takes to get the word out, I guess.

Speaking of the Devils, they're undoubtedly looking at results like Buff State's 3-0 win over PSU that same night as the Fredonia-Canton game and thinking "hey, maybe we can get healthy here." While head coach Jeff Meredith's crew is 5-7-0 overall (3-5-0 SUNYAC), the team has lost five of its last six (including a 7-3 home loss to BSC, in case you're one of the six people who believes in the transitive property in sports). It's fair to say that it has struggled to find offense in the wake of the graduation of Bryan Ross, who finished as the fourth-leading scorer in program history. The Blue Devils have been held to one goal or fewer in half of their games this season, and needed overtime to pot a second score in one other. Mat Hehr has taken over the leading scorer mantle with four goals and eight points, while reigning SUNYAC Rookie of the Week Taylor Bourne has four goals of his own.


In spite of his team's recent skid, Meredith does feel like his team showed improvement in a split with Elmira last weekend.


"There are a few areas of our game," he said, "that still need some shoring up, namely, our special teams. I thought our first 10 minutes (on Saturday) was the best start of the year. We generated chances, and a lot of them but just was not able to finish them.

"The encouraging thing is that we are getting those chances where six weeks ago we were not. I think there is a lot to be optimistic about and I think the guys are feeling it as well."

In net for the Devils, all three goalies return. Jeff Holloway played last season's game at PSU, surrendering five goals on 27 shots, but Mark Friesen, who has a 3.36 goals against average this season, is the regular starter.
Posted by Kyle Rossi at 4:56 AM