Gross Featured in The Penn Stater

Women's captain Taylor Gross was included in the January/February 2013 edition of The Penn Stater alumni magazine, as the subject of the single-page profile on a Nittany Lions student-athlete that always leads each issue's sports section.

Because (to the best of my knowledge) The Penn Stater's content isn't available online, I thought I'd use my powers to share Gross' page with those who do not get the magazine, as I once did with former Icers captain Marek Polidor. The text of the write-up follows, with a scan of the page at the end.

This well-traveled forward leads the Nittany Lions in their varsity debut.

Taylor Gross went to high school in Colorado and started her college career at the University of Connecticut, a stay that lasted just a year and a half. She came to Happy Valley last January, drawn by the university's academic reputation and because, she says, "I thought it would be a really cool place to start a hockey program."

She plans to relocated again next fall, but this move will be a shorter one - 50 yards, give or take. A junior forward and captain of Penn State's first Division I women's hockey team, which opened varsity play in October, Gross says she's fully focused on the current season. That means playing in the intimate, yellow-lit rink at the Greenberg Sports Complex, all while construction on the Pegula Ice Arena - Penn State's hockey home starting in 2013 - continues just a slap shot away. "I haven't even thought about the new rink," Gross says. "But I know it's there."

For now, Gross is content to leave the new rink to the construction crews. She and her teammates are too busy building a foundation of their own. 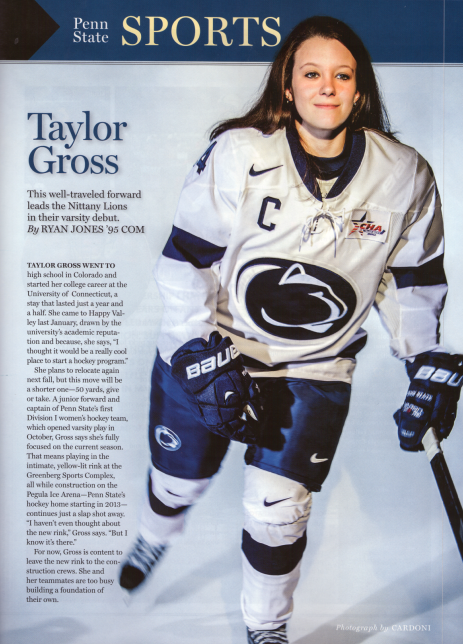