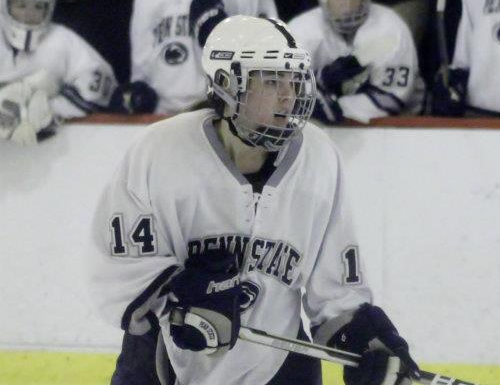 College of Communications alumnus/alumna? Planning on going to the Penn State-Vermont game in Philadelphia on January 19th? Good news: you have a place to pregame.

IcersGuy continued his outstanding series explaining college hockey to the masses last week with a tutorial on the junior hockey system.

If you missed it, Part 1 outlined the differences between club and varsity hockey, while Part 2 discussed college hockey's ever-changing conference alignment.

The PSU Women's Ice Hockey Club finally has a website. It might look a little familiar, but hopefully the webmaster's grind can make up for it. Also, the team has a new Facebook page, and their not-new Twitter account is still there, so get after that.

Captain Carly Szyszko (pictured) and the fourth-ranked team are back in action on January 13th at Navy for a Sunday afternoon tilt. 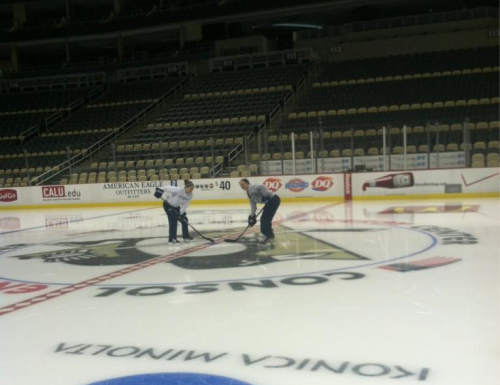 Because the men's team didn't use their allotted morning skate time on the second day of the Three Rivers Classic, women's players Cara Mendelson and Katie Murphy did. Well played.

It's a good thing that IcersGuy dropped the second-star post this week, because BSD needed to win some karma points back after this steaming pile. Not only is men's hockey a "smaller sport" in BSD's estimation (I mean, it's no wrestling, after all), but it gets treatment like:


Because the NHL is still locked out (LULZ @ U HOCKEY FANZ)...

...and proceeds from there with some lazy, predictable trolling of both Penguins and Flyers fans. Didja know, for example, that PSU has more wins than the Flyers this year?!?! Because they're locked out!!!! Get it?!??!?!?

As much (deserved, mostly) criticism as Bleacher Report takes, it actually does deliver pretty good women's hockey stuff, including this quick feature on Mercyhurst's Jenna Hendrikx. Hendrikx attended a Provincial Women's Hockey League game over the holiday break to benefit Do it for Daron, a foundation created to honor the life of Daron Richardson, the daughter of then-Ottawa Senators assistant coach Luke Richardson (and a PWHL player herself) who tragically took her own life in 2010. Do it for Daron supports teen suicide and depression awareness and causes.

Mercyhurst's Christine Bestland gets tabbed as college hockey's midseason MVP in this slideshow, while Rebecca Vint of Robert Morris scoring five goals against Penn State on November 10th is given best single-game performance so far. Someday we'll be on the other end of things like that, I promise.

As long as we're on the CHA, Robert Morris released the names of a pretty strong group of signees for next season. Over one month after the early signing period closed, but hey, better late than never.

While Arizona State's SB Nation blog tends to be a little... uhhh... homertastic concerning the school's ACHA team, it does provide very good coverage, including of the Great Northwest Showcase over the weekend. The Burnaby, BC event involved games between ACHAers (and Penn State opponents) ASU and Oklahoma, and Canadian non-varsity power Simon Fraser as well as the CIS program from the University of British Columbia.

Long story short, the ACHA representatives were blasted by the Canadians to the tune of a combined 12-2 count on the showcase's first day. However, the Sun Devils bounced back with a win over Simon Fraser on Saturday after losing to UBC, while Oklahoma extended the Thunderbirds to overtime to follow up their loss to SFU.

In another holiday tournament involving a future PSU opponent, Michigan State settled for a fourth-place finish at the Great Lakes Invitational after a third-period barrage boosted archrival Michigan to a 5-2 win in the GLI consolation game. On the first day of the tournament, Western Michigan and Michigan Tech (the eventual champion, for the first time since 1980) ousted the two Big Tenners from title consideration.

I guess I should point out that the GLI was originally scheduled for the Detroit Tigers' Comerica Park this year before being moved back to its customary Joe Louis Arena home. Thanks so much, NHL players and owners.
Posted by Kyle Rossi at 11:37 AM