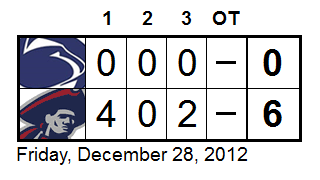 Guest recapper Ross Insana of Penn State ComRadio has the details on the Nittany Lions' disappointing 6-0 loss to Robert Morris to open the Three Rivers Classic Friday afternoon at the CONSOL Energy Center in Pittsburgh. RMU climbs to 8-4-2 (4-3-1 Atlantic Hockey) and will play Miami - which won 1-0 over Ohio State in Friday's second game - for the tournament championship Saturday night at 7:30 p.m. PSU drops to 8-10-0 in all games, 7-9-0 in NCAA games and 5-8-0 against NCAA Division I competition and will face the Buckeyes in the consolation game Saturday at 4:30 p.m.

The completed live blog is beneath Ross' recap.


Early on it looked like Penn State would get on the board quick and early as the David Glen line, flanked by Casey Bailey and Max Gardiner on his wings, buzzed in the Robert Morris zone less than a minute into the game to create two early opportunities on RMU netminder Adam Levine. Glen was able to grab a turnover to the left of Levine and almost put Penn State up 1-0. But from then on out the first period, and for that matter the rest of the game, was all Robert Morris and there we not many bright spots for Guy Gadowsky and Company.

Just 1:49 into the first, Robert Morris’ Andrew Blazek, a junior from the Pittsburgh area in Upper Saint Clair, was able to create his own opportunity by getting up ice quickly and used his speed to his advantage to beat Peter Sweetland and eventually beat Musico short side for his fourth of the season on Robert Morris’ first shot of the game.

On Robert Morris’ first powerplay opportunity of the game, a David Glen tripping penalty 4:21 into the first, the Nittany Lions did a good job keeping the Colonials to the outside, mucking it out down low, and getting in shooting lanes with three blocked shots. Robert Morris was only able to get one good look at Musico late in the powerplay with a scrum around the net the end the Robert Morris’ charge.

At the 8:50 mark, Robert Morris’ Brendan Jamison went off for tripping the fast-moving Casey Bailey through the Robert Morris zone to give Penn State their first powerplay opportunity of the game, which coming into today was clicking at only a 8.3% success rate (5-for-60). The Nittany Lions first unit of Glen, Bailey and Gardiner saw most of the time on the powerplay chance with a lot of quick puck moving and four shots thrown at Levine but no goal to boot.


Minutes later Glen found an open seam through the Colonials defense in what was probably the Nittany Lions best opportunity of the game. He was able to get in all alone on Levine but did not manage to find the back of the net to get Penn State on the board. A few seconds later Musico was able to make a dazzling glove hand save on Robert Morris’ David Friedmann to keep the score at 1-0 with a little over seven minutes left in the first.

After what was a close game for most of the first, the Red Sea was parted for Robert Morris as their leader in points, Adam Brace, grabbed his sixth goal of the season with 4:07 left. Literally 28 seconds later, Cody Wydo made it 3-0 Robert Morris picking up the garbage (insert Mighty Ducks movie reference) off a Musico rebound in front. Wydo then struck again for his second of the game with 37 seconds left in the first, beating Musico in transition through the five-hole from the left faceoff circle. The sophomore winger finished the game with an impressive plus four for the Colonials.

“You’re not going to win many games not scoring any goals, but certainly we put ourselves in a deep hole. We score that and a couple of them stay out it’s a different ballgame, but that’s ifs and buts. Bottom line is we put ourselves in a hole and we couldn’t come out of it,” said Gadowsky post-game.

To start the second, Head Coach Guy Gadowsky made the bold but not surprising move to go with hometown guy and McKees Rocks’ own Matt Skoff between the pipes for the 2nd period.

“We had predetermined that he [Skoff] will get the start tomorrow. Unfortunately, he had to come in today, but he was strong when he came in,” said Gadowsky.

For most of the early portion of the second, Penn State controlled the time of possession in the offensive zone, but the story for the majority of the period was the number of penalties and activity after the whistle by both teams. About six minutes in, David Glen came down the left hand side with Casey Bailey subsequently driving to Levine and the Colonials net and was able to draw a slashing penalty on Robert Morris’ Jeff Jones to put Penn State on their second powerplay chance. Their best look at the net developed with a shot from the right point by alternate captain Nate Jensen with Gardiner screening Levine as Bailey went untouched right on the doorstep and was not able to finish.

After another shot from the point by Jensen, Gardiner and Robert Morris’ Evan Renwick got into a lot of extra-curricular activity with after the whistle that compelled the referee to send both to the box officially for coincidental “hitting after the whistle” minor penalties. The rest of the second period was mostly back and forth action with good shifts consecutively by the Loik/Holstrom/Brooks line and the Longo/McDonough/Olczyk line for Penn State despite the score still at 4-0 Robert Morris. The big moment came with 34 seconds left in the second as Glen nailed Blazek behind the Robert Morris cage and was called for a five minute major for contact to the head and given a ten minute game misconduct. No further suspension for Glen has been announced as of yet.

Just before the Glen major ended, Robert Morris cashed in to make it 5-0 in the third as Greg Gibson came down the left side and found Zac Lynch in the slot where his shot off Skoff found the stick of Matt Cope in front for his first of the season. The Colonials then capped off their dominant performance with a nice feed by Blazek on the point to his partner Tyler Hinds for his second of the season to make it 6-0 with 4:08 left in the third.

Some positives, if any, to take out of the 6-0 loss was the Bailey-Glen-Gardiner line consistently generated chances and showed energy during their shifts. For those who weren’t in attendance at Consol Energy Center, the contingency of Penn State fans did make their voice heard on a few occasions with a big “We Are” chant being one of the highlights of the second period.