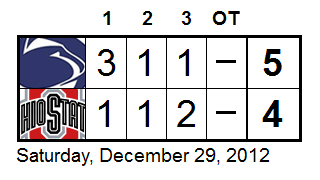 On October 19th, Penn State endured arguably its lowest point of the season, in an even-uglier-than-the-score 3-0 loss at NCAA Division III Buffalo State. The next day, the Nittany Lions rebounded for arguably their most significant win of the NCAA era at the time, 3-2 at RIT's homecoming in front of 10,556 orange-clad fans at Rochester, NY's Blue Cross Arena.

On December 28th and 29th, Penn State (9-10-0 all games, 8-9-0 NCAA, 6-8-0 NCAA DI) went even bigger. Or B1Gger, if you prefer. Just 24 hours after being blasted by Robert Morris 6-0 in their first game at the inaugural Three Rivers Classic, PSU delivered a stunning and historic 5-4 win over future Big Ten rival Ohio State (7-8-5, 6-3-3 CCHA) in the consolation game Saturday afternoon before a crowd of 10,797 at Pittsburgh's CONSOL Energy Center.

The history, of course, is due mostly to the fact that the Nittany Lions won in a first try against a future conference opponent. It shouldn't, however, be overlooked that it was also PSU's first victory over any major-conference opponent after beating Atlantic Hockey schools AIC, RIT, Army, Sacred Heart and Air Force in this season's other DI wins. "Stunning" also stands as an accurate descriptor, given the previous day's result and the fact that PSU was just 2-7-0 in all games since beating Air Force on November 10th, with the wins coming against an ACHA team and an NCAA DIII team.

In delivering the historic stunner (yeah, let's play that one out), the line of Casey Bailey (two goals, two assists), Taylor Holstrom (two goals) and Max Gardiner (three assists) led the way for the Nittany Lions, while OSU's Ryan Dzingel was magnificent in defeat with a hat trick on six shots. Former Ohio State signee Matt Skoff made 36 saves to help PSU survive a late Buckeye rally from a three-goal third-period deficit. 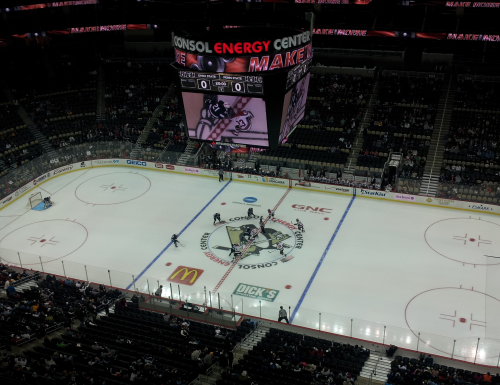 Dzingel dueled with Nittany Lion defenseman Nate Jensen all game long, and won the first battle on a nice give-and-go play with Clark Cristofoli where he worked around the Mercyhurst transfer and backhanded past Skoff 3:56 into the game. It would be the last time Penn State would trail.

After PSU struggled with organizing its breakout early on, the Buckeyes began to have problems at the 7:45 mark when an errant pass went right to Gardiner just inside the OSU line. The big Minnesotan fed Curtis Loik down low to finish, just seconds after having his previous attempt denied by Collin Olson, who made 32 saves. Ten minutes later, Holstrom gave Guy Gadowsky's troops the lead when he generated a turnover from Al McLean behind Olson and got the puck out to Bailey. The initial attempt was foiled, but Holstrom circled back out front to put home the rebound.

The Nittany Lions added a rare power play goal before the first period horn when Bailey - who would go on to make the all-tournament team - finished a nice passing play started by Gardiner winning a battle on the boards and including Luke Juha during a 5-on-3 with 1:17 to go. It was PSU's first goal on the advantage against a DI opponent since Jonathan Milley's effort against Army on October 26th, as the Nittany Lions rank 56th in DI with an 8.7 percent conversion rate.

The favored Buckeyes, Dzingel in particular, did not fade away. The Ottawa Senators draft pick cut PSU's lead to one 2:39 into the second period when he made a takeaway on Holstrom along the wall in the Penn State zone, walked to the middle and fired it behind Skoff. However, after surviving Tanner Fritz's attempted tying snipe off of the crossbar, the Nittany Lions received a crucial (and game-winning) response with goals just before the second period expired and just after the third period started. On the first, Bailey potted a second goal by deflecting Juha's point blast with just nine seconds remaining. Holstrom added his second of the game off of a brilliant drop pass in front following up on Connor Varley's shot in.

Once again, OSU would threaten the security of the lead, and once again it was through Dzingel, who joined Bailey on the all-tournament team, but not until after undressing Varley and then Skoff with some greasy mitts. Tyler Lundey and Curtis Gedig received assists on the the goal, but it was largely a solo effort. With Olson pulled for an extra skater following Gadowsky's use of his timeout and with 2:28 remaining, Alex Szczechura made it a one-goal game by taking advantage of chaos in front of Skoff with a stealthy wraparound. The goalie from nearby McKees Rocks, however, stood tall through a barrage the rest of the way, including one last prime attempt with Dzingel with 12.6 seconds left.

Penn State will attempt to follow the stirring win with a couple more when it travels to Storrs, CT for a series against Connecticut on January 4th and 5th. The team makes its Ice Pavilion return the following weekend against the U.S. National Team Development Program U18 team.