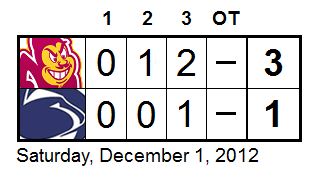 After a couple hours of reflection, I think the most painful thing about the Nittany Lions' (7-6-0, 5-4-0 NCAA DI) 3-1 loss to ACHA frontrunner Arizona State (19-1-0, 18-0-0 ACHA D1) is that it was completely deserved. In defeat, there's always some degree of comfort in cliched excuses like "we let them hang around too long" and the old standby "we dominated, they just had a hot goalie." None of those really apply here.

The Sun Devils came into the Ice Pavilion and outplayed Penn State, period. Every bit of the program history they gained Saturday night was well earned.

It needs to remembered, after all, that they play some very good hockey in the ACHA, and top-ranked Arizona State is likely the best the association's top division has to offer this year. Just recently, in fact, I posted about how the talent level on the Icers eased our transition to NCAA Division I. It would be pretty hypocritical of me to turn around and deny the talent level at a school fate didn't deem fortunate enough to be making its own transition right now. And hey, remember that time that an Icers team featuring the coaching staff and 16 of the 27 players from this year's Nittany Lions didn't lose fewer than four times against ACHA teams and/or win the ACHA national championship?

On the other side, it wasn't PSU's best game, not by a long shot. Just as on Friday night, turnovers plagued the Nittany Lions, with a major difference this time around being that Guy Gadowsky's power play wasn't clicking on a level capable of outscoring those mistakes. On several occasions, chances were destroyed with an errant pass, and it's fair to say that the effort wasn't at the level it was last weekend at Union.

The earliest indication that Penn State's power play would be far off of its 100 percent rate in the series-opening win began 9:28 into the first period, when Danny McAuliffe was called for elbowing. A hitting from behind whistle against Jordan Young followed in short order, but the Nittany Lions fired a dud over 3:14 of advantage time, including 46 seconds with a 5-on-3. PSU had actually started the game in good form, but counterintuitively, the long power play seemed to deflate things for the remainder of the first period.

Just 38 seconds into the middle period and following an offensive zone turnover, Dan Styrna blew by Peter Sweetland down right wing. Nate Jensen attempted to get across to help on the sudden odd-man rush, but that backfired when Styrna found an unattended Faiz Khan in the middle of the ice. Khan pumped one past P.J. Musico for a 1-0 Sun Devils lead that lasted through the second intermission. Kale Dolinski, a Minot State transfer, gave ASU a 2-0 lead 2:40 into the third period by sniping from the high slot after pouncing an unattended loose puck left by Tommy Olczyk.

While PSU's power play ended 0-for-5, the Nittany Lions' shorthanded unit was much more efficient. Four minutes after Dolinski's goal, and with Taylor Holstrom in the box for tripping, Olczyk's nifty dangle and pass in front found Curtis Loik for a goal to cut the deficit to 2-1 with 13:32 left. Instantly and finally, Penn State snapped to life and an equalizer seemed a formality for the next several minutes - for a split second, it appeared to happen via Dom Morrone's deflection of a Luke Juha's bomb through traffic, but the goal was waved off due to the puck being gloved in by Morrone (don't ask me to make a judgment call on that after watching via a blurry and yellow streaming video).

Dolinski instantly killed Penn State's momentum and any realistic chance of a comeback with his second unassisted goal, and once again, he made one of PSU's high-profile forwards - Max Gardiner - pay for a miscue. The tally off of a partial breakaway came with 6:25 remaining, but with the Nittany Lions re-entering their previous lifeless state, with an assist to ASU's stifling forecheck, 16:25 probably wouldn't have been enough.

Joe D'Elia was outstanding in goal for the Sun Devils, stopping 36 of the 37 shots he faced. P.J. Musico made 27 saves in the opposite crease.

The Nittany Lions will need a quick bounceback, as Holy Cross awaits in Worcester, MA next weekend. The Crusaders have emerged as one of the tougher opponents on Penn State's schedule, as their 6-3-2 mark in Atlantic Hockey (7-4-2 overall) is good for second place in the league behind Niagara.