Richard to Join Linemate Glen in 2013 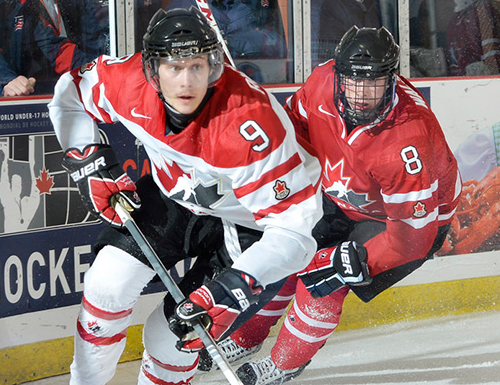 According to Chris Heisenberg's well-known recruiting spreadsheet, Penn State's 2013 men's class now numbers seven, thanks to the commitment of Dylan Richard on Friday.

The lead here, in case the identity of Richard's present team (or this post's title, I guess) didn't flip your light switch, is that he and David Glen are former teammates - linemates, in fact.

To be precise, Glen and Richard were together for two full seasons, 2010-2011 and 2011-2012. The Saints' regular season record over those two years was 94-14-8, while postseason accomplishments include the 2011 AJHL championship. Last season, Glen and Richard were the second and third leading scorers on the team, and both were key contributors to the 2011 title season as well, despite Richard's being one of the youngest players on the team at the time.

With the way Glen has performed this season - he's Penn State's leading scorer of course (his 1.07 points per NCAA game are tied for 35th best in the country) and works just as hard on the other end of the ice - it's pretty hard not to be excited about bringing in his running mate.

Jump to 5:28 of this video to see Richard - pronounced like the Rocket's surname - scoring a goal with a reasonable degree of filth back in October.

That goal, and the 16 others that accompany it so far, seem to indicate a player who has taken an additional step offensively this season. He had a hat trick on Saturday in a 6-1 win over Canmore, in his second game after committing (happy to meet you too). While that outburst snapped a three-game pointless streak, he's been remarkably consistent, as he's only been blanked ten times in total all season. He had a goal and three assists on September 16th in a 9-4 win over the Calgary Mustangs. The Saints have followed suit with 24-9-5 record so far to once again sit on top of the AJHL's North Division. Richard's 33 points lead the team and rank 14th in the league, while his 17 goals are ninth best in the AJHL.

In November Richard was selected to Team Canada West for the World Junior A Challenge, helping the squad to a silver medal with four points, three of them coming in a 7-0 blitzing of the Czech Republic to open the tournament. He'll join Luke Juha (2010 silver, 2011 gold), Curtis Loik (2011 gold) and Eamon McAdam (2012 gold) as a WJAC medalist on the Nittany Lions next year, and will also join Glen, Loik, Reed Linaker and (starting in 2014) Bo Pellah as a western Canada native playing at PSU.
Posted by Kyle Rossi at 11:51 PM