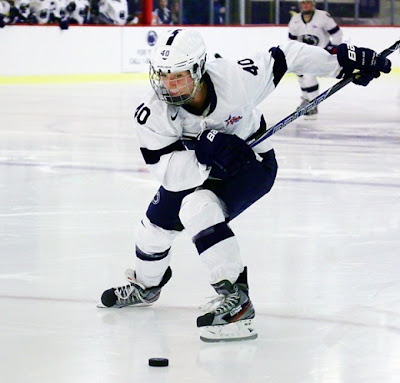 Freshman forward Shannon Yoxheimer has been named College Hockey America's Rookie of the Month for November and becomes the first CHA monthly award winner in program history. She just missed on being Player of the Month as well, as she was nominated, but lost out to Robert Morris' Rebecca Vint. Here's the blurb from the league website:

Shannon Yoxheimer was Penn State’s most powerful weapon offensively, accounting for 39 shots, 4 goals, 5 assists and 9 points in the program’s second month. Her four goals were tied for a team-high, while her assist and point totals both led the Nittany Lions. Yoxheimer opened the month with a three-goal, two assist weekend vs. Sacred Heart in a pair of victories. Yoxheimer then scored against defending CHA Tourney champion Robert Morris to cap a seven-game goal-scoring streak. She then provided three assists at Lindenwood (Nov. 16-17) to help the Lions to a split in the weekend series and winning their first CHA game.

Yoxheimer previous won CHA Player of the Week honors on October 22nd, for her two goal, one assist, twenty shot weekend in a split with Sacred Heart. Freshman forward Micayla Catanzariti was the CHA's Rookie of the Week on October 8th for her three-point outing in Penn State's historic 5-3 win over Vermont to open the NCAA era on October 6th.
Posted by Kyle Rossi at 12:59 PM