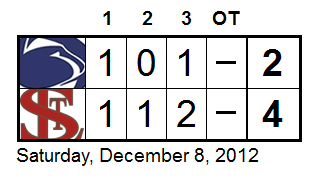 I'd like to once again apologize for the circumstances that prevented me from doing a live blog for - or even watching - this game. For those who don't know, my dog Paterno collapsed in severe pain about 20 minutes before puck drop and I had to rush him to the emergency vet. Long story short, he had a lesion on his spleen and severe internal hemorrhaging. Surgery removed the spleen and the blood, and as of this writing, he's alive, drugged up and sleeping at the vet. He's hardly out of the woods - beyond surviving the moment, there's also the possibility of cancer. But so far, things have been more encouraging than not.

Anyway, the Nittany Lion women (5-12-1, 1-8-1 CHA) closed the fall semester schedule with a 4-2 loss at St. Lawrence (10-7-1, 6-2-0 ECAC). Jess Desorcie's rebound goal from Taylor Gross and Shannon Yoxheimer opened the scoring, and Hannah Hoenshell's backhanded snipe off of a takeaway pulled PSU within one with 8:09 remaining in the contest, but those two couldn't outweigh SLU's four different goal scorers (three of whom received assists from Jenna Marks). Nicole Paniccia was her typical outstanding self in defeat, with 54 saves.

I'm going to try something a little different this time around - a mash-up of the recaps from both sides, since athletic communications assistants all tend to play up their team and downplay the other.

Desorcie gave the Nittany Lions their first lead of the weekend with 6:16 remaining in the first [period], corralling a rebound from Gross' shot and firing it back at [St. Lawrence goalie Giulia] Mazzocchi and into the back of the net.

That lead would last only 1:32, however, as the home team responded at 15:18 to level the scoring at 1-1. Sophomore Amanda Boulier found Marks in the slot, who quickly shuffled a pass to Kayla Raniwsky at the top of the crease for her fourth goal of the year to cap the first period scoring.


St. Lawrence, which finished with a 24-10 lead in shots after 20:00, continued to pressure Paniccia throughout the second period. Though the junior goalie did all she could, the Saints took a 2-1 lead on the power play at 11:42. Marks again got the play started in the offensive zone, finding Mel Desrochers inside the blue line. The Welland, ON native hammered a slap shot that Paniccia slowed down, but couldn't stop from crossing the goal line for Desrochers' first of the season.

Penn State did well to get out of the second period trailing just 2-1, but saw that deficit grow to 3-1 at 8:10 of the third period. First-year Kailee Heidersbach was able to sneak the puck behind Paniccia at the far post for her sixth of the year, with Raniwsky and Marks assisting.

Down 3-1 midway through the third period and seconds after the Saints killed off a Penn State power play, Hannah Hoenshell took possession off an SLU turnover in their own zone and beat Mazzocchi with a shot to pull the Lions back to a one-goal deficit.

A slashing call against Jeannette Bateman with only 2:39 remaining in regulation would stifle Penn State's comeback effort. The Saints' power play added an insurance goal 50 seconds into the penalty, as Amanda Boulier blitzed a shot from outside the circle that trickled through Paniccia's pads and into the net for the 4-2 lead. Junior Rylee Smith assisted on the goal that ensured the home team's victory.

Paniccia finished with 54 saves, including 23 in the first period. "I thought that was another solid effort to end the semester," said St. Lawrence head coach Chris Wells. "We really played with a ton of energy and jump. Paniccia was really fun to watch in the net as she gave a fantastic effort."

The Nittany Lions return to action for a home series Jan. 4-5 against Chatham before road swings against Union and Syracuse Jan. 11-12 and Jan. 25-26, respectively.
Posted by Kyle Rossi at 11:30 AM