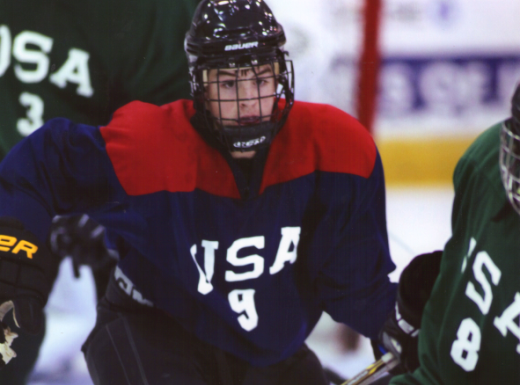 UPDATE 3:38 P.M.: The Moncton Wildcats have confirmed that now-former Penn State recruit Conor Garland will be joining their team. Here's the segment of their release that doesn't duplicate information:


The Moncton Wildcats have received a commitment from 1996 born and the Cats 6th round draft pick in 2012 Conor Garland. He is anticipated to suit up for his first QMJHL game on Friday versus Victoriaville. Garland has been playing with the Muskegon Lumberjack in the USHL as a 16 year old where he had 3 points in 6 games.

“Conor is an offensively gifted young player. I had the opportunity to coach him in a tournament in Moncton this summer. He has great hockey sense and a nose for the net.” described Head Coach and Director of Hockey Operations Danny Flynn. “Keep in mind that he is just 16 years old but he has the potential to develop into a very good offensive player for the Wildcats down the road.”

The remainder of the post is what originally went up early this morning.

According to U.S. Hockey Report (USHR), star 2015 recruit Conor Garland has left his USHL team and will likely sign with the QMJHL's Moncton Wildcats, the team that selected him in the sixth round of the major junior league's entry draft in July.

Here's what USHR disclosed (behind a pay wall, but the copy/paste is short enough that I don't think I'm violating ethical standards):

A 3/11/96 birthdate, Garland had a 1-2-3 line in six USHL games this season. A Scituate, Mass. native, he went out west and put up 116 points in 52 games with Shattuck’s Bantam Team in ’10-11, then returned home to play for the Junior Bruins Empire Team last year, where he scored 94 points in 40 games. This season, in going out to the USHL, he skipped a necessary step – he should probably be playing in the EJHL right now. Instead, with Moncton, he’ll be playing on his fourth team in three years – and turning down a college scholarship.

The news seems to be confirmed by the Lumberjacks' website, which has removed Garland from its roster.

Garland had just committed in August, choosing Penn State over (according to him) every program in Hockey East as well as a number of ECAC schools, after being floored by a visit to campus.


“Campus is pretty unbelievable, seeing Beaver Stadium when we were pulling out of the airport was pretty crazy,” said Garland. “They took us around campus and saw the basketball center, all the different facilities they have for sports, and then obviously the hockey rink is going to be state of the art.

“It definitely felt good, and not to commit to just and Division I school, but a school like Penn State, it felt awesome because that place is going to be unreal.”

The diminutive forward, as USHR mentioned, was attempting to play in the USHL as a 16-year-old, and struggled to crack the lineup consistently, dressing for just six of the Jacks' 21 games so far. He put up gaudy numbers at his previous stops, thanks largely to a willingness to work the high-traffic areas despite his size. That said, while his loss is certainly a blow to what was (and still is) shaping up as a strong recruiting class, it shouldn't prove devastating given the overall talent of the next few incoming groups and the amount of time remaining to pursue alternatives.

Unofficially, and if USHR's prediction plays out, Garland will become the second Penn State commit to wind up in the CHL, following defenseman Thomas Welsh, who signed with the OHL's Mississauga Steelheads last week after decommitting in September. It could be argued that Guy Gadowsky and his staff addressed Welsh's departure by bringing in Patrick Koudys, an NHL-drafted player with previous Division I experience at RPI, including an NCAA Tournament trip - a trade I'm more than happy to make. Hopefully this news is met with a similarly productive response.
Posted by Kyle Rossi at 2:36 AM