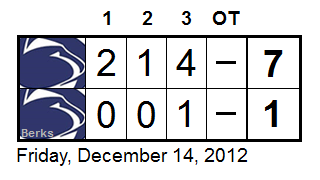 The Ice Lions, which beat ACHA Division 1 Penn State-Berks 8-3 at the Ice Pavilion to open the season, took a little longer to get going on Friday in southeastern Pennsylvania. Eventually though, strong special teams proved too much for Berks in a decisive win to climb to 12-4-1.

After some back-and-forth action to open the game, Max O'Malley scored about 13 minutes in to put the University Parkers ahead for good. Chris Lewis made it 2-0 at the first intermission with a power play goal set up nicely from behind the goalline by Joe Zitarelli. Berks and goalie Michael Narrigan continued to stand tall through most of the second period, and very nearly escaped the middle frame at 2-0 before Zitarelli created a turnover on the forecheck while shorthanded that was buried by Brandon Russo in the last minute of play.

The relentless Ice Lions power play finally put things out of reach in the third period, when Taylor Vincent scored on a cross-crease pass from Peter Daley while on the advantage. Lewis followed up with a his second PPG of the game, a dirty effort assisted by Zitarelli and Mike Broccolo in which he collided with Narrigan while scoring. Lewis, by the way, clearly won that confrontation. While he was knocked to the ice, he made the most of it with a snow angel celly. Narrigan, on the other hand, was knocked out of the game and watched as Justin Golia gave up two late goals to pad the margin a little.

Ryan DeMuth survived the mediocre beaks of the home crowd ("number one, your five-hole is ginormous big," for example) to turn in a solid effort despite allowing a late goal - through his six hole (between the stick/blocker arm and body). 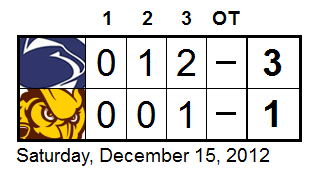 PSU followed up the Berks win with an even bigger one - 3-1 over Rowan, the Southeast Region's second-ranked team, to climb to 13-4-1 heading into the semester break. With the Ice Lions fourth in the region entering the game, some upward movement on the back of this result seems likely in the next D2 poll, expected out Friday. It also vaults PSU ahead of the Profs into the driver's seat of the MACHA North at 5-0-0 in the league.

Because it's literally the only information I could obtain online about it, here's most of the HockeyYall.com recap - I thought it would be rather disingenuous to lift information from there and restate it in my own words without bringing anything additional to the table.

In both teams’ most meaningful game of the season to date, Penn State defeated Rowan 3-1 Saturday in New Jersey to improve to 13-4-0-1 and strengthen its hold on first place in the Mid-Atlantic College Hockey’s North Division.

After a goaless first period, Mac Winchester scored in the second to give Penn State a 1-0 lead that it carried into the third, where the Ice Lions outscored the Profs 2-1. Frederick Linge and Mike Broccolo scored for PSU to help gain the win for goalie Ryan DeMuth.

"[It was] a tight game from start to finish," noted Matt Morrow, Penn State’s head coach.

The win was the Ice Lions’ sixth in their last seven games. They will resume their season Jan. 11 at No. 6 Liberty, another MACH opponent.

After going undefeated and untied in their first 11 games, the Profs were 4-4-1-1, including three losses in their last four games, and stand at 15-4-1-1 today. They’ll return to the ice on Jan. 6 against Montclair State.

"The Virginia Tech loss (7-1 on Dec. 7) was the only bad loss," said Caulfield. "We were totally outworked there. The UMBC (Maryland-Baltimore County) and PSU games, we just couldn’t score. And when we made mistakes, they scored. We need the break — injuries and tired bodies."

Both Penn State and Rowan are likely to see a change in their status when the ACHA releases its third Southeast Region ranking of the season this week, with the Ice Lions moving up the ranking and Rowan heading South.

There's not much new to report on the women, who hit the break at 4-1-1 after thrashing Slippery Rock 8-0 on December 9th. The team is undoubtedly hoping to see some upward movement in the second ACHA Women's Division 2 poll of the season - due out this past Sunday, but unreleased as of this post - on the back of that win.

Several team members rank at or near the top of the ACHA WD2 statistical charts. Goaltenders Sarah Eisenhut and Katie Vaughan are 1-2 in goals against average, with a 0.72 and a 0.86, respectively. Vaughan leads in save percentage with a 0.959 mark, and Eisenhut's 0.947 is fourth. Offensively, freshman sensation Devon Fisk's 10 goals are tied for 11th overall, but 7th when counting on a per-game basis.
Posted by Kyle Rossi at 12:25 AM