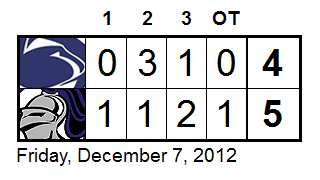 At the beginning of the NCAA era, I set a simple rule for myself: don't get mad for the first two years.

The reasons for such a rule should be fairly obvious, but just to make them explicit:
With that out of the way, if there were ever a game where I were to break that rule, it would be this one, just for the way things seemed so perfect for Penn State (7-7-0, 5-5-0 NCAA DI), then turned so quickly and decisively in favor of Holy Cross (8-4-2, 6-3-2 ECAC). The Nittany Lions, as a result, have now dropped five of seven.

After a slow start - a David Glen turnover led to Adam Schmidt's 1-0 goal 3:58 into the game, and PSU was outshot 16-5 in the first period - the second period was a great example of where we should eventually set our expectations. The Nittany Lions scored three times in the middle 20, but more significantly than that, it was a creative, free-flowing, yet gritty and defensively responsible effort. Pretty much textbook Guy Gadowsky stuff.

During a four-on-four situation that resulted from Caston Sommer's takedown of Matt Skoff and Connor Varley's reaction to it and just 21 seconds into the second period, Casey Bailey capitalized on the extra ice. He skated seemingly unnoticed into the slot, where he deflected Nate Jensen's point shot to force a rebound from Crusaders goalie Matt Ginn, then put back that rebound to tie the game. Glen - who bounced back tremendously from his early mistake, by the way - put back a Pete Sweetland rebound to give the Nittany Lions the lead 7:30 later, and Varley finished the burst at the 12:39 mark off of sort of a role-reversing give-and-go with Jonathan Milley that involved the big forward feeding the defenseman from up high as he streaked towards the net - remember what I just said about creativity?

Milley would finish with a goal, two assists and a plus-three rating, adding up to a highly-successful return to the lineup after missing the past month with a hip injury.

Penn State's power play has been the subject of some criticism this year. It's ranked 54th in the country with an 8.0 percent conversion rate, and its four total goals lead only Harvard in NCAA Division I. That unit actually didn't take the ice all game, as Sommer's matched penalty was the only Holy Cross infraction of the contest. This time around it was Penn State's penalty kill, ranked a better-but-still-not-very-good 32nd, standing in as the disappointing special team by surrendering two crucial goals, the first of which came late in the second period.

On that goal, Holy Cross cut the PSU lead to 3-2 just nine seconds into a Milley boarding penalty by winning the draw to start their power play, moving the puck to Sommer at left point, and getting traffic in front of Skoff, including Mike McNamara, who tipped Sommer's shot in. After intermission, Milley overpowered Ginn in the crease on a second-chance goal to restore Penn State's two-goal lead at 4-2. That score lasted into the last six minutes of regulation when...ehhh...I don't want to break my rule, so I'll just not think about it and pass off to the Holy Cross side.


Freshman Matt Vidal (Manorville, N.Y.) scored his first collegiate goal, making the score 4-3 at 14:44 when he split through two Penn State defenders and took a low backhand shot into the Penn State net after receiving a tipped pass from sophomore Nilan Nagy (Canonsburg, Pa.). Zych also recorded an assist on the play for his second of the night and team-best 10th of the season. Just over two minutes later at 16:51 Holy Cross tied the game on a power play goal, forcing overtime action. The goal occurred when junior Shayne Stockton (Rochester, N.Y.) picked up a pass from sophomore Jake Youso (International Falls, Minn) and sent a puck through the five-hole of the Nittany Lions' goalie. Freshman Joe McNamara (Chestnut Hill, Mass.) also recorded an assist for the play.

Holy Cross defeated Penn State 1:54 in overtime play when [senior captain Erik] Vos netted the game-winner. After a fight for possession in front of the net, Vos stuffed the loose puck beneath the glove of the Nittany Lions' goalie and into the back of the net, giving the Crusaders the victory. Youso and freshman Karl Beckman (Okemos, Mich.) each posted assists on the goal. The last time Holy Cross won an overtime game was on Nov. 6, 2010 against Robert Morris, with a score of 3-2.

A learning experience in a season - or two - full of them? Absolutely. More than that? Forget it, there's another one tomorrow.