Awkwardly, the semester-end rankings for both the men's and women's ACHA teams were released after this past week's Club Sandwich post, so I'll address them briefly here.

Men: The Ice Lions, thanks largely to a win over then-Southeast No. 2 Rowan on December 15, moved from fourth to second in the region. While just two spots, the significance is much larger than that: the top two teams in each region earn autobids to the ACHA national championships, bypassing the regional playoffs. The trick now, of course, is to stay there until the end of the regular season.

Women: Pat Fung's crew also moved up, from fifth overall (fourth in the East Region) to fourth overall (third in the East Region). Like the men, the team's current position would qualify them for a nationals bid - which would be quite the story as a first-year organization built largely through the hard work of student leaders.

IcersGuy at BSD is putting together a series of primers for those new to this whole NCAA hockey thing - and the comments are proof that he's doing an excellent job of it. If you want to be into Penn State hockey and don't know what any of us are talking about, this would be my recommended place to start.

Is this the first official nod to the fact that there will be Big Ten hockey next year? No, but it kind of feels like it. 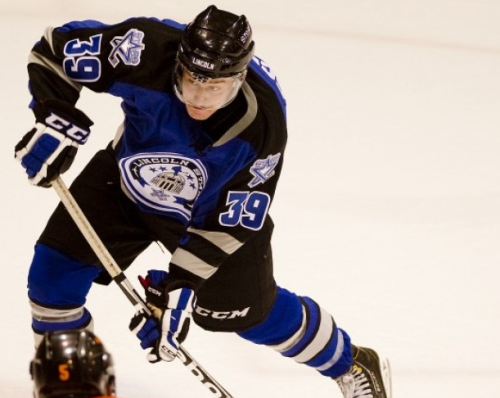 Scheid making most of return to Lincoln Stars
(Lincoln Journal-Star)

This story was worth dropping here, where it will presumably get more attention than in Commit Cycle, which generates about 30 pageviews each time out (seriously... and it's easily the most time-consuming thing I do on a regular basis). So, PSU signee Eric Scheid, where did you consider going after leaving Alaska-Anchorage?

And, of course, there's the obligatory "why did you pick Penn State" quote:


Scheid visited State College, Pa., before committing to Penn State. He’ll be the first former Star to play there.

"I had it narrowed down to a few schools that were interested, and the Penn State campus was the one that really stuck out to me the most," he said. "It had everything I was looking for as the Big Ten atmosphere with all the sports and a lot of students. They offered the playing time I was looking for going right in, instead of having to sit."

Thanks to recent rumors, there's been a renewed push to get NCAA hockey to URI, complete with a Twitter account. Here's a blog post looking at the possibility.

I happen to think that Rhody represents one of the more credible rumors out there, but Penn State was a pretty credible rumor for quite a while too. We shall see.

From purely a Penn State perspective (disregarding general hockey interest, et cetera), there really isn't much reason to care about the World Junior Championships yet, beyond how it affects other teams. Good news: it does. Highly-regarded Miami forwards/NHL draft picks Sean Kuraly and Riley Barber will miss the Three Rivers Classic, as will Ohio State coach Mark Osiecki, due to their participation in the WJC.

Calling my shot right now: PSU gets revenge on Robert Morris, while the missing firepower for the RedHawks costs them against the Buckeyes. All-Big Ten championship.

Speaking of holiday tournaments, the one outside of Pittsburgh I'll be keeping my eye on is the Great Northwest Showcase in Burnaby, BC. It involves ACHA teams Arizona State and Oklahoma (both PSU opponents this year) as well as Simon Fraser, probably Canada's best non-varsity program and UBC, a CIS school that frequently plays exhibitions against NCAA teams - this year, the Thunderbirds went 1-1-1 against Air Force, Denver and Colorado College.

If you're not a fan of throwing teams at different levels and under different sanctioning organizations together to see what happens, I don't get you.

Let it be known that there are hockey jerseys available at Lions Pride, the official PSU merchandise store of TYT.

The End Is Nigh
(Fear the Triangle)

Finally, shoutout to FTT - my go-to for all things UMass hockey and beer - which is shutting down at the end of the season, due largely to the life circumstances that inevitably catch us all at some point (there aren't a ton of unpaid bloggers who are over 30, with kids and a successful career if you haven't noticed).

Not to get too personal, but there was a lot in this post that resonated with me, in terms of the blog's backstory and having "that moment" when you fully realize your limitations (living in Ohio, I have realizations of a smaller magnitude quite frequently). I was fairly late in learning about FTT, but look forward to reading the rest of the way, especially since we have more in common than I realized.
Posted by Kyle Rossi at 1:39 AM