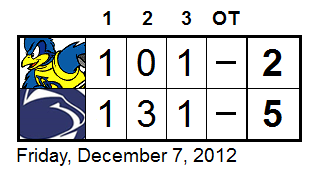 It's not often that great passing gets headline status, although through the Ice Lions' performance against Delaware it probably earned the privilege, as PSU's first three goals were all the product of pretty set-ups.

Neil Laessig opened the scoring 4:14 into the game by snapping one past Delaware goalie Joe Marshall after a nice Will Vaeth indirect pass started a rush. He was quickly answered by Matthew Gumina on the power play, but the Ice Lions would surge back ahead with a three-goal second period.

Two minutes into that frame, Taylor Vincent finished a 2-on-1 with Reluzco. That was followed with Chris Lewis going five-hole on a give-and-go and Joe Bonazelli's backhand-forehand-shelf goal. The Blue Hens did pull within two in the third period thanks to Trevor Richmond slamming one home from the back door, but Ryan Urban squelched any comeback notion by finally finishing a shorthanded breakaway, after PSU had been denied on two attempts earlier in the game.

In goal, Teddy Steinhart turned in a workmanlike 21-for-23 effort, while - and how's this for balance - 12 different Ice Lions registered points, but none had more than one. 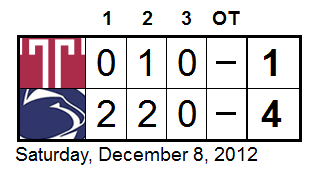 Penn State didn't waste any time jumping all over Temple in a key MACHA North matchup, as Vincent put back Reluzco's rebound 4:03 into the game, and after a long stretch of PSU dominance (the Ice Lions won the first-period shot count 25-5) Joe Zitarelli made it 2-0 ten minutes later from Mike Broccolo. Another pair of goals - Urban, from a Reluzco feed that deflected in off of his skate and Brandon Russo through traffic - in the first 3:18 of the second period effectively sealed the game's outcome.

Temple did escape being shut out in the highly-physical contest that saw 14 minor penalties handed out, as well as injuries to Laessig and Vaeth from a scary first-period collision. With five minutes remaining in the second period and Chris Dinsmore off for tripping, the Owls' David Brewer connected on the power play to make the score 4-1. However, goalie Ryan Demuth and a defense that only forced him to make four third-period saves shut the door the rest of the way.

The Ice Lions, now 11-4-1 (4-0-0 MACHA North) and ranked fourth in the Southeast Region of ACHA Division 2, will close their fall semester schedule this coming weekend with two very tough games at Division 1 Penn State-Berks (Friday) and at the Southeast's second-ranked team, Rowan (Saturday).

I covered the ACHA women's team's 8-0 blasting of Slippery Rock in its first-ever home game Sunday morning separately, so here are those posts one more time:

The short-notice game (it was just announced just five days before it was played) may prove quite important for No. 5 PSU, now 4-1-1. ACHA Women's Division 2's next poll is due out Sunday, and the win over No. 11 SRU will stand as the team's only contest since the release of the current ranking, dated November 18th. In other words, without it, Penn State would have been in the unenviable position of trying to tread water without playing a game between polls.

Furthermore, among a tightly-packed cluster of teams, co-No. 3 Delaware is just four points clear of Penn State for fourth place overall and (more importantly, given the format of the national tournament) third among East Region teams. The Blue Hens are 1-1-0 since the present poll came out, and only beat The Rock 6-3 on November 17th. Could Sunday's result trigger upward movement for PSU? Here's hoping.

The women resume their schedule after break with a game at Navy on January 13th.
Posted by Kyle Rossi at 4:08 AM