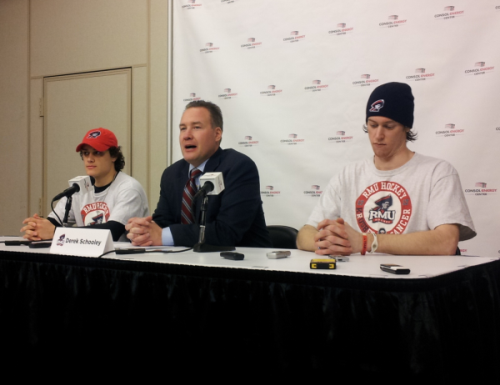 
Derek Schooley: It was a tough hockey game actually for us. When you get a 4-0 lead, especially when you’ve only practiced twice, you get a 4-0 lead and usually what happens is you take your foot off the gas a little bit and that’s kind of natural. We did, which allowed them to outshoot us in the second period 14-4, but I thought we righted the ship in the third period. We got a goal to kind of take it completely out of question. But I thought we were very good offensively, we were great from the red line in, I thought we were a little sloppy in between the blue lines, defensively we’ve got some things we can tighten up, but when we made mistakes, Eric [Levine] was there to bail us out. We probably had a half dozen big saves, but a lot was from the perimeter. For the first game back, you score six goals and get a 6-0 win, you’ve got to be happy about it. Now I’ll open it up to questions.

What kind of statement did the team make tonight, not just to get a big win over a team that played you tough not very long ago, but to do it here, in Consol, and not get daunted by the stage or anything like that?

DS: Well we’ve played here before. We’ve got a lot of young freshmen, [but] we’ve practiced here before. I think getting an early lead was key for our hockey team, and then obviously we had a tremendous last five minutes of the period there. I don’t think we were intimidated by the stage, I don’t think we had any nerves, I think we just went out and we played hockey. We made mistakes, they made mistakes, unfortunately for them, their mistakes went in the net. That’s hockey for you.

Can you talk a little bit about the play of [Andrew] Blazek, with a goal and an assist? He seems to be heating up for you lately.

DS: Andrew’s a very good offensive player. He was a forward that we converted to defense a couple years ago. Really a great individual effort on the first goal, went wide to the outside, then beat a guy, then a nice shot. He’s got about four or five goals now, and he’s an offensive presence that joins the offense and makes plays. He’s still got some things he needs to work on in his end, he needs to simplify his game at times because he’s such a good skater, he tries to beat people too much. But he’s getting it. He’s starting to figure it out a little bit.

I know it’s not an apples to apples comparison, but you’ve been in the position where you’ve maybe had a little bit of an overmatched squad against a more experienced one. On a stage like this, when a game gets out of hand - when it’s such a lopsided score on such a big stage, what are some of your concerns, not only what you want to see from your team accomplish, but what you might want to do in setting tones for a budding rivalry when a score gets so out of hand on a big stage?

DS: I never felt comfortable or thought it was out of hand until it was 6-0. I think the way they came out in the second period, that was the way they took it to us in the first period at Penn State. We were back on our heels, they took it to us. Like I said, we were good offensively, we did the things we needed to do to score. We got good goaltending. I think when you get in those situations, you have to try to stay the course as much as possible. It’s human nature to take your foot off the gas a little bit, but you have to continue to try to stay the course a little bit, and do what you do to be successful. You can’t get away from that, and I thought we got away from it in the second period, hence the 14-4, and then we picked it back up in the third and capitalized on some chances.

What do you think a result like that after a close game does for the rivalry going forward?

DS: I mean it’s hockey. That’s hockey and that’s the way things are. Who knows, we win two, they may win the next two. It’s hockey, you deal with it and you play on. Every year’s a new year and every year’s a new team. I like playing them. I think it’s good for college hockey, and I think it’s good for hockey in western Pennsylvania. I think it gets a tremendous amount of exposure for our program and for Penn State, especially on a big stage. And hopefully after next year, we’re set to play next year again, hopefully we can continue that in future years. We’ll find out.

Eric Levine: Well I think you said the main thing, that we’re advancing to the championship. That was our goal, so shutout, no shutout, we got the win, that was the important thing. To be honest, I thought our start at Penn State was pretty bad, and we responded really well. It’s tough when you’re up 4-0, because their team is going to press hard, so you expected that, but the guys did a good job at the start. It’s nice, this is the first time I’ve had a chance to play here. It’s an unbelievable rink, it’s cool to put yourself in that position in an NHL-caliber rink, so it’s very nice, but I’m happy we got the win. We’re where we want, 7:30 tomorrow night.

Cody Wydo: Yeah, it’s really satisfying getting two goals tonight. It was a big crowd, probably one of the biggest I’ve ever played on, and just going out and actually, full team effort in the first period, pretty much what it was, everyone was clicking. Evan Renwick had two good shifts right there, he had two nice assists with my two goals.

How does this set the mood for tomorrow’s championship game?

EL: We’ll be playing one of two good teams. We played Ohio State a couple weekends ago, and they were an extremely good opponent. Miami, obviously, ranked fifth in the country, so they’re going to be a tough team. We’re excited, but we’re excited to play for a championship trophy. We’ve said it before, we have two championships we want to win, three if you count Atlantic Hockey, and this is the first one. It’s good to get a taste of a little bit of pressure. It’s going to be a stage that we’re going to have to get used to playing on, because when we come down to the end of the season, every game matters. So this is an important game, and it’s going to be good experience for us, it’s going to be good to play the 7:30, and whoever we play is going to be a tough opponent, so we’re going to need to be a lot better, but I like our chances.

CW: Yeah, Levy said it pretty good, whoever we play, they’re going to be good. If we play Ohio State, they’re going to be wanting revenge on us for beating them and tying them. Miami’s really skilled and a really good team, they’re ranked in the top ten. We’re just going to have to come out with our A game all three periods in order to have a good contest with them.

DS: To add to that, I hold Paul Steigerwald responsible too, because last night at the banquet he reminded Miami that we swept them four years ago. I would have hoped that they had forgotten about that by now, and he had to bring that up. So it’s back fresh in their minds too. I think the guys said it – it’s going to be a challenge no matter who we play. We need to play better, we need to continue to get better, and it’s our last non-conference game heading into a boatload of Atlantic Hockey games, and a nationally-televised game next Friday against Army. We need to put ourselves in the best position we possibly can.

Cody, your line was responsible for all three of those goals at the end of the first period. What was clicking for you guys, chemistry-wise, during that stretch?

CW: Coach has been mixing [Scott] Jacklin and [David] Friedmann up with us, and he put Friedmann with us today, which I thought was a good call. Pretty much the first goal, Blazek just took it end to end and had a nice shot, post and in. Second goal, we just had a nice rush and the puck found me in front of the net, so I just put it five hole. Then the third goal, we had another nice rush, and I was actually the fourth man in there and I came in late and the puck came right to me again. Right place, right time.

Eric, you faced almost 50 shots tonight. I know a lot of goalies like getting that constant action. Are you that way, and was it that kind of night where you just had to be on your toes?

EL: Yeah, I mean, every game’s different. I mean obviously, they had 48 shots, but that’s a little deceptive. Our defense, our backcheckers did a good job. Not too many shots came from high percentage scoring areas, so they kept it to the outside. There’s not much you can do as a team when teams want to shoot from far out. Though we gave up a lot of shots, we did a good job taking away some of the scoring chances. As a goalie, it’s nice to be comfortable, and to kind of get into a rhythm, and I certainly felt like that tonight. Every game’s different, and happy we got the win.

Eric, you mentioned the fact that this was your first game on this stage and playing in an arena like Consol. To get an early lead and have the advantage, how much did that help you out when you guys had a 1-0 lead two minutes into the game?

EL: It’s nice when you have guys who can put the puck in the net early on. Like I said, I thought we were fighting it a little bit at Penn State [13] days ago, so we knew we needed a better start. We came out, got four goals. As a goalie, that’s nice, but it doesn’t really change the way you play. You still want to just focus on the next shot. The guys battled hard, and they may have had 48, but there weren’t too many high-quality chances. It was nice to play in this venue, and great to get a win.
Posted by Kyle Rossi at 9:33 PM