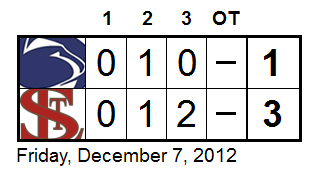 As Josh Brandwene understands, this is still about process and not necessarily results just yet:

Still, my initial reaction to this particular result - along with a couple preceding it - was along the lines of "man, I wish we had another shot at that Syracuse-Sacred Heart-RIT stretch from early in the season." The Nittany Lions went 1-4-1 over those games from October 13th through October 26th, scoring just four times outside of the lone win of the sequence, 6-1 over SHU. Anyone doubt that the December 7th version of the team could better that? I can't wait to see where things progress from here to early March and the CHA tournament.

I decided to go with the St. Lawrence recap to fill in the details this time around, because it read to me as a very balanced account of the game - helpful when not actually seeing it for yourself. Besides, to the victors go the spoils (if these are, in fact, "spoils," teams should probably stop trying to win). So without further ado...

The St. Lawrence University women's hockey team scored a pair of goals in the third period to defeat Penn State University 3-1 at Appleton Arena on Friday night. Senior captain Kelly Sabatine broke a 1-1 tie at 7:53 of the third to push the Saints to the victory in the first ever meeting between the two teams.

St. Lawrence, now 9-7-1 on the season, finished with a 48-16 advantage in shots including an 18-4 edge in the third period. The Nittany Lions, in their first season as an NCAA division I team, fall to 5-11-1 despite a brilliant 45-save outing in net by Celine Whitlinger.

Though the home team owned a 14-6 advantage in shots in the first period, Whitlinger posted a perfect frame and kept Penn State in the game. St. Lawrence would finally cash in at 14:10 of the second, as rookie Jenna Marks one-timed a shot past the goaltender for her fourth of the season. Fellow rookie Kailee Heidersbach set up the goal with a perfect centering pass, while classmate Dominique Korakianitis also earned her first career assist on the first goal.

A penalty against St. Lawrence in the final minute of the second period would allow the Nittany Lions to tie it at 1-1. Only 18 seconds after the power play began, Jill Holdcroft slapped the puck past Mazzocchi after Shannon Yoxheimer's initial shot was blocked back into the slot. The goal, Holdcroft's fifth, set up a dramatic third period with the game knotted at 1-1.


St. Lawrence applied constant pressure on the Penn State defense, which finally cracked when Sabatine scored her ninth of the year for a 2-1 lead. Junior Rylee Smith found Sabatine in the slot, and she sniped a wrist shot past Whitlinger's blocker with 12:07 remaining in the game. Rookie Abbey McRae also had an assist on what proved to be the game-winning tally.

Penn State would look to generate some offensive chances in the final minutes, and were able to get Whitlinger off the ice in favor of the extra attacker. However, the Saints would flip the ice and Kayla Raniwsky would tack on an empty net goal with 51 seconds left to put the game away. Heidersbach and Marks each assisted on the insurance goal.

The Nittany Lions closed with a 1-for-5 mark on the power play while the Scarlet and Brown were 0-for-3.

St. Lawrence and Penn State will meet again in a rematch tomorrow, Saturday, December 8 at 2:00pm.
Posted by Kyle Rossi at 11:33 PM