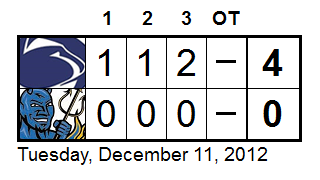 In a rescheduled (from October 30th, due to Hurricane Sandy) Tuesday night game nearly as awkward as Carly Szyszko, Allie Rothman, Mary Kate Tonetti and I in the same room at the same time, the Nittany Lion men dominated NCAA Division III Fredonia State at FSU's Steele Hall by a 4-0 count to improve to 8-8-0 (5-6-0 NCAA DI).

Because, in the words of the legendary Carl Spackler, I was unavoidably detained, I'm turning over recap duties on this one to Justin Grady, aka IcersGuy from Black Shoe Diaries. Enjoy your brief reprieve from mediocre writing, and be sure to check out Grady's stuff on BSD as well.

With Penn State having to make the midweek trip to New York, just days after returning from Massachusetts, there were sure to be questions about the energy levels for the team. Luckily for Penn State, any lack of energy was countered by Fredonia State's own seemingly lethargic attitude towards this Tuesday night game - perhaps a result of being 1-5 over their previous 6 games. If Penn State couldat least match Fredonia's energy, the Nittany Lions were, on paper, in a solid position to snap their 4-game losing streak (or 3-game losing streak, depending on if you count the ACHA Arizona State games).

The first period opened with each team getting some light scoring opportunities, with no major offensive chances coming for either team. A delayed penalty early in the period gave Penn State their first set of real offensive chances, but nothing came from it except for the ensuing penalty. On the first power play of the night, the inconsistent man-advantage play reared its head. The Nittany Lions struggled to put together any consistent attack time until later in the power play, but credit to the Fredonia defense for blocking shots and goalie Mark Friesen kept it a scoreless game.

Fredonia would get a great scoring chance following the power play, as Matt Skoff would let a FSU shot slip past him, only to have it be swept away by his defense, averting any chance of weak goal. As both teams would continue to try to gain some sort of offensive momentum, a penalty to Luke Juha gave Fredonia their first power play of the night. The Blue Devils had a few good chances early in the power play, but the Penn State penalty kill would find their groove and keep the Blue Devils from getting any more quality chances.


The quality PK for Penn State turned into positive momentum for the team, as the Nittany Lions started to dominate offensively. After a few good chances were turned away by Friesen, Connor Varley would take a shot from the point, which found its way through a number of bodies in front and past the Blue Devils' goalie,giving Penn State the 1-0 lead at the 17:55 mark of the first period. The goal is Varley's third on the season. Penn State would continue their offensive onslaught, but have to settle for the 1-0 lead after the first 20 minutes. Penn State outshot Fredonia in the first period by a 23-9 margin.

Penn State kept their offensive momentum going into the second period, with seemingly everybody geting a scoring chance. Shots from Bailey, Saad, Loik, and Friedman were all quality chances that only were foiled thanks to the continued quality showing from Friesen. Fredonia would weather the storm and eventually come back with their own chances, but Skoff was up to the task of matching his goaltending counterpart. A couple of Penn State penalties slowed down the Nittany Lions' offensive attack, but the penalty kill made sure the Blue Devils found very few opportunities to tie the game with the man advantage.

With just over a minute left in the 2nd period, Penn State would get their second power play opportunity. Max Gardiner would take a wrist shot from the top of the circle, and Taylor Holstrom would put home the rebound, only to have it waved off as it was ruled that Holstrom's hand knocked the puck into the net. But with 30 seconds left in the period, the PSU power play would make one more rush. This time, it was Casey Bailey putting home a Peter Sweetland rebound with just fourseconds left in the period, giving Penn State a 2-0 lead heading into the second intermission.

The third period saw a return of the lethargic play that seemed to creep into both teams' play throughout the game. While each team would eventually get a round of scoring chances, it was the goalies and the defense/backchecking that dominated play to open the third period. It would take some quick thinking to break the defensive pressure, and so David Glen would make a sweet backhanded pass to Jacob Friedman in the slot, who skated in a snapped a shot past the Fredonia goalie, giving Jake his first goal of the season, and Penn State the 3-0 lead.

Back-to-back penalties against Penn State gave the Blue Devils a handful of chances to break the shutout. But the Nittany Lion penalty kill was up to the challenge, completing a perfect 5-for-5 penalty kill on the night, and nearly extending the lead - unfortunately, Lordo's shot from the blue line rang off the iron. Following the end of the second of the two penalties, both teams returned to the stagnant offenses from the start of the period. Fredonia State would eventually pull their goalie late in the game, and Curtis Loik would deposit his third goal of the season, with help from Jensen and Matt Skoff - Skoff's first point at Penn State. Skoff's assist would be a nice addition to his first shutout of the season, turning away all 18 shots he faced in the 4-0 victory for Penn State. In the end, it was a complete domination by Penn State, controlling much of the play, and outshooting the Blue Devils by a commanding 50-18 advantage.
Posted by Kyle Rossi at 11:10 PM