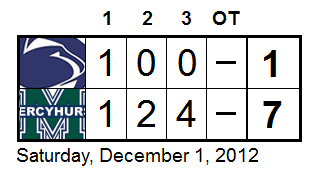 In a season of tracking firsts, this one probably won't be recorded for posterity, but it was significant nevertheless as Penn State's first taste of the top of the NCAA food chain (as well as the men's team played against then-No. 8 Union last weekend, the Nittany Lions never led in either game). There will be more to follow, and someday some upstart team will undoubtedly brag about scoring against mighty Penn State, but for now, this is uncharted territory and worth savoring for a bit.

The goal, 8:29 after the opening faceoff, was made possible by Taylor Gross' repeated abuse of Mercyhurst's defensive corps. On this occasion, the captain generated a turnover at the blue line and raced in behind everyone. Lakers goalie Stephanie Ciampa moved to her left to make a nice pad save on the breakaway, but Jess Desorcie was following the play and managed to deposit the rebound into the gaping cage. That actually followed a nearly identical play a couple minutes earlier, but the first Gross takeaway-breakaway ended with no rebound and no goal.

Even though the play didn't factor into the final result, it did take something of value from the Lakers: a shutout streak that lasted 303 minutes and four seconds, dating back to November 2nd when Lindenwood's Allysson Arcibal beat Ciampa to open the scoring of an eventual 6-1 Lakers win. This tilt ended at the same destination as that one but took a different route there. Forty minutes of outstanding team defense - if you don't understand that there were too many contributors to efficiently list everyone by now, you don't know this team very well - kept the game as close as 3-1 into the third period before things got out of hand late. Nicole Paniccia made 64 saves to set a new personal and NCAA era high-water mark.

For the Lakers, Molly Byrne began a three-point afternoon by answering Gross off of a turnover midway through the first, and Jaclyn Arbour gave the hosts the lead for good 9:04 into the second period. Arbour, the granddaughter of legendary New York Islanders coach Al Arbour, added a third-period goal, while Christine Bestland, Lauren Jones and Vaila Higson each had a goal and an assist.

Penn State closes the fall semester segment of the schedule next Friday and Saturday with a trip to St. Lawrence. The Saints, recipients of one vote in this week's USCHO poll to unofficially rank 12th, are 8-7-1 (6-2-0 ECAC) this season and won the ECAC tournament last season to qualify for the NCAA tournament.