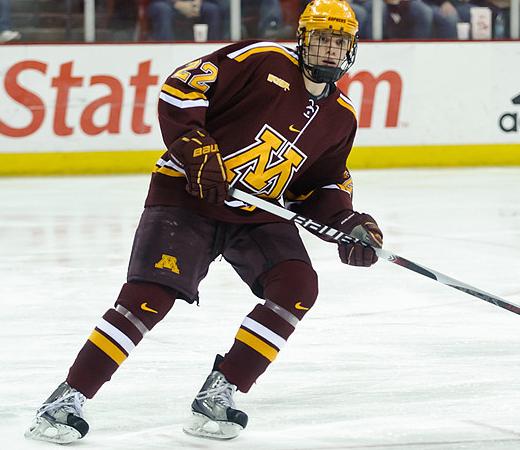 To be sure, Guy Gadowsky is bringing in several very good recruits this fall. But in much the same way as Tommy Olczyk's last name meant that his arrival overshadowed four former Division I players this year, Max Gardiner's status as an NHL draft pick (as well as his formerly playing for The U - as it's called up there - one of the meccas of college hockey) all but ensures that he'll draw the most interest of next year's class.

So with that in mind, TYT brought in a guest blogger who has seen Gardiner play beyond his highlight reel from Minnetonka High to give you an idea of what to expect when he hits campus next season. Enjoy!


Hello Penn State fans and congratulations on getting both a Division I hockey team and state of the art arena! My name is Nathan Wells and I cover University of Minnesota hockey for SB Nation Minnesota, as well as doing many other things. In that role I've had the opportunity to watch Penn State’snewest recruit Max Gardiner and thought it would be nice to give a first-hand idea of how he plays.

It goes without saying, as Kyle mentioned in his excellent write-up, that the 6’3”, 190 lb forward is best-known for being the younger brother of Anaheim first-round pick and present Toronto defenseman Jake Gardiner. At one point, however, Max was seen as the better brother but that’s not the case today. The two don’t share similar styles and while Jake’s excellent skating and vision has led him to the NHL, Max’s skating held him back during his one season at Minnesota.

In fairness to Gardiner, he was rushed by the Gophers. The plan initially was that he would spend a year between high school and college playing in the USHL but was brought in at the last moment after Josh Birkholz was suspended and subsequently left for the WHL. That season would have made a difference because Max ended up being down on the Gophers depth chart in a year key to his development.

When he did play, Gardiner was usually on the fourth line but still spent a good portion of the year battling for playing time. He worked hard but eventually it became apparent that Max was a guy who didn’t have the talent to supplant anyone in the top-six (even without Zach Budish for most of the year with a knee injury, the Gophers had three experienced seniors and first-round pick Nick Bjugstad up front) and didn’t flourish in a bottom-six role.

The two main reasons for that were skating and decision-making. The WCHA is a grind for freshmen and things which worked in high school do not work in college. For some players it is the size difference and while Max is lanky and has room to fill out, that wasn’t an issue compared to his skating not being at the same level as other players. There were many times when Gardiner would try to do something which got him by in high school (i.e. skate the puck through open ice, make an extra pass) but college defensemen would be able to easily stop.

There were also times when his decisions led to defensive lapses or taking out-of-position penalties and with other players having better two-way play, Gardiner spent more and more time in the press box.

At the same time there also are many positives about Max’s game which shouldn’t be overlooked. He has good hands, an okay shot and is a solid playmaker to the point where he’s an asset on any team if used in the right position. Gardiner can make others around him better, works hard and knows how to use his size to his advantage. Although I wouldn’t say he’s a power forward in the traditional sense – Max plays a more finesse game and isn’t as physical as one would think – he is a guy who understands the game well.

In short, there are plenty of tools to work with but Gardiner has not developed into a complete player. From speaking with a couple scouts who have watched him play for Dubuque, they agree that he doesn’t play with the same edge that other players Max’s size do. If given a top-six opportunity, which is very possible with Penn State after not being the case at Minnesota, I can see Gardiner doing big things in college as a playmaker and integral piece on a team. However, he still needs to evolve from being a one-dimensional player as others have caught up to Gardiner’s skills and he was unable to embrace a more gritty, lunch pail style of play.

I hope that helps. If anyone has any questions that I didn't answer, feel free to ask in the comments or on Twitter (my handle is @gopherstate), Thanks again and good luck with Max and the world of Division I hockey.
Posted by Kyle Rossi at 11:25 PM