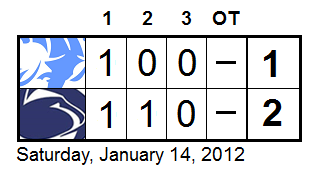 Penn State, now 17-3-1, finished off a season sweep of 15-14-0 Rhode Island in the teams' final meeting, but it was not the type of victory that will contribute much to the end-of-the-season highlight reels. A sluggish, turnover-prone outing that looked like something out of last season forced goalie P.J. Musico to be outstanding in stopping 23 of 24.

Just 2:50 into the game, when Tommy Olczyk scored on the power play off of a scramble in front, the possibility of a blowout mirroring Friday night's 9-3 win seemed distinct. However, the game quickly became bogged down from that point as the Rams clogged the neutral zone to limit the Icers' transition game. Scoring chances soon followed, and Alan Dionne's blast through a crowd during a late first period power play tied things at one. Justin Kirchhevel responded with a patient drive from the top of the circle on an Icers power play one period later, which would serve as both the game winner and the scoresheet closer.