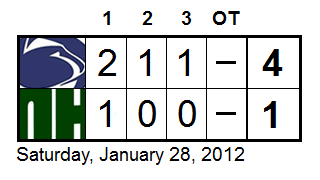 The Icers took their final leave from Bird Arena with a 4-1 triumph over Ohio Saturday night. With the victory, Penn State moved to 21-3-1 (20-2-1) this season and clinched a season sweep of the Bobcats for just the second time in the 30-year series history. Friend of TYT IcersGuy tells it like it was.


The Icers turned to Matt Madrazo for the Saturday night game. But a little over two minutes into the game, a Ohio slapshot from the point would be deflected behind Madrazo, giving the Bobcats an early 1-0 lead. The Icers would pick up the offensive pressure, however, and George Saad would wrist home a goal to tie the game at 1-1. Late in the period, the Icers would finally break through on the powerplay, as Pete Sweetland would get his first goal as an Icer, giving Penn State the 2-1 lead. The second period mirrored Friday night's second period, where both teams would get powerplay but fail to convert. With 6:25 left in the period, Saad would benefit from falling behind the play, as he would end up with a breakaway and his second goal of the game. Not wanting to get swept, the Bobcats came out with the energy and pressure to start the period. But the defense and Matt Madrazo would not be beat, keeping it 3-1 Icers. Late in the period, the Icers would crack the Bobcats pressure, and Justin Kirchhevel would score on the breakaway, putting the icing on a 4-1 Icers victory and a season sweep of the Bobcats.

Coming out of this weekend, there's little to discuss as good/bad/otherwise for this team. This really just means that the team has continued their solid play from the past few weekends. Credit to the Bobcat penalty kill, which was very aggressive and disrupted the Icers' power play 14 out of 15 times. (Of course, that one Icers powerplay goal ended up being the game-winner on Saturday.) But outside of a lackluster powerplay, the Icers looked solid offensively - finding ways to sustain pressure and get quality opportunities against a solid Ohio team. The defense did well to shut down most of the OU chances, and kept their turnovers to a real minimum. And both goaltenders played outstanding to hold the Bobcats to just one goal each game. In fact, in the four-game season sweep for the Icers, they outscored Ohio, 18-6.
Posted by Kyle Rossi at 11:30 PM