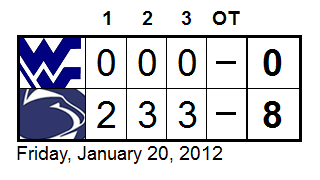 The Icers (18-3-1), who held on to their No. 1 ranking by the slimmest of margins this week, perhaps bolstered voter confidence with an 8-0 thumping of No. 23 West Virginia Friday night in the Ice Pavilion.

While PSU dominated throughout the game, outshooting the Mountaineers by a 56-17 margin, they didn't crack the game open until a pair of Michael Longo goals 30 seconds apart in the second period. Longo later added a pretty primary assist on a Mike McDonagh goal. Tommy Olczyk had his own pair for PSU, while Paul Daley opened the scoring on a beautiful backhand after motoring down the wing. P.J. Musico earned his second collegiate shutout in the win.

WVU will get another crack at the Icers Saturday afternoon at 3:30 p.m.