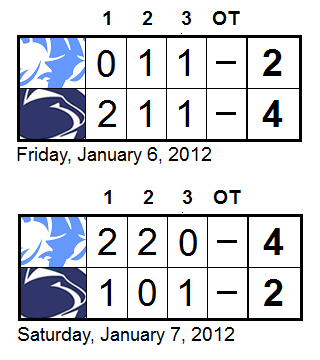 The Lady Icers, for the most part, are done with their NCAA games this season. Two at DI Sacred Heart remain next weekend, but they are the last of the eleven scheduled.

This semester, though, presents a different type of meat grinder - top ACHA competition. And it couldn't come at a better time for a squad needing to impress the ACHA voters (who slotted PSU 12th in the last poll, in part because the Lady Icers had played but six games in the association to that point).

First in that stretch: Rhode Island. And in two words, impression made.

Penn State split with URI, taking Friday night's tilt 4-2 but dropping Saturday's by the same score. And while some might take issue with my calling a split a statement, consider that the Lady Icers had dropped their last five to the Rams, dating back to October 23rd of last season. Not impressed? Okay, try this on: that win last year was the only one for PSU during the tenure of previous head coach turned assistant Mo Stroemel, despite four scheduled meetings per year. Stroemel was the head coach from 2007-2011. So yeah, beating them is a big deal, made even more so by their status as the No. 5 team in the country.

That first game provided a glimpse of the team's potential, as key veterans meshed with the large freshman class and two key transfers. The last group - Jess Desorcie and Taylor Gross - scored two early goals (Gross' was shorthanded), helping the Lady Icers to a 3-0 lead on one of the ACHA's best teams with 16:02 left in the second period. But don't neglect the first two groups either, since Madison Smiddy scored the middle goal of the three on the power play. Fellow freshmen Katie Murphie and Tess Weaver assisted on Desorcie's goal, and vets Allie Rothman and Lindsay Reihl helped on Smiddy's. Weaver also got her own goal midway through the third to stop a potential Ram comeback before it was able to get started.

The loss the next day swung largely on penalties. Weaver got the Lady Icers on the board first, although URI bounced back to take a 2-1 lead into the intermission. The Rams then blew the game open by scoring two goals as a result of a 5-on-3 situation during a fateful second period stretch, enough to outweigh Desorcie's second of the weekend in the final period. PSU actually won the shot count in the loss (32-29) after being outshot rather convincingly in the win.

Regardless, this feels like the beginning of a run. And with a eight-game stretch of No. 1 Northeastern, No. 4 Liberty, Northeastern again and No. 6 Massachusetts beginning on January 20th (after the Sacred Heart games), it couldn't come at a better time.
Posted by Kyle Rossi at 1:23 PM