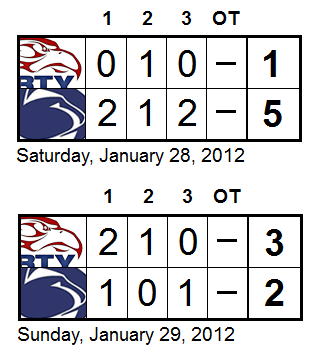 
Ranked 12th at the conclusion of the fall semester, the Lady Icers since then (and bolstered by incoming transfers Taylor Gross and Jess Desorcie) have pumped out wins against NCAA Division I Sacred Heart, then-No. 5 Rhode Island and then-No. 1 Northeastern. So naturally, it was a little upsetting when Friday's poll showed that the payoff for that effort was but one spot in rankings. Against that backdrop of disrespect though, a rallying cry emerged among a steeled team: "kick in the door."


Desorcie took an enthusiastic first kick Saturday afternoon against new No. 5 Liberty, staking PSU to a 2-0 lead in the first five minutes of the game. She finished the natural hat trick at the tail end of a hitting from behind penalty to Liberty's Madison Fischer with 11:07 left in the second period. A fourth goal with nine minutes remaining polished off the final result. The goals gave Desorcie 12 in just seven games since arriving from NCAA Division III Connecticut College.

In hockey, the ultimate team sport, nobody ever does anything alone, and Desorcie - as good as she is - is no exception. With her the whole way were linemates Gross (who scored the other PSU goal and assisted on three of Desorcie's) and Tess Weaver (who assisted on all five Lady Icer goals).

It can be said every week but Katie Vaughan was also outstanding, making 24 saves while surrendering only Carly Peleshok's second-period goal that trimmed the PSU lead to 3-1.

Hockey, like life, isn't perfect though. Sometimes all the kicking in the world can end with mixed results, as happened when Liberty came back to win 3-2 on Sunday. Katharine Gausseres, a tremendous two-way Lady Icer, answered Laura Del Monte's power play goal midway through the first to tie the game at one. Over the next 30 minutes though, Liberty would jump out to a 3-1 lead - enough to withstand Weaver's goal on the advantage in the third period. The Flames, the alleged favorites, had escaped the Ice Pavilion with a split, despite Penn State's being in control for large portions of the game according to observers (PSU enjoyed a 33-23 shot advantage).

If a tie is like kissing your sister, a weekend "tie" has to feel about the same. Maybe a little worse with a bid to the ACHA national tournament on the line. Still, the big picture hardly looks that dire. While the team's record is 8-13-2, it's 7-5-0 against ACHA competition. Furthermore the team, as currently constituted, has gone 3-3-0 this semester against the current No. 2, No. 4 and No. 5 teams in the ACHA (scoring three more goals than it has given up in the process). PSU has clearly proven worthy of the top five, even if the polls haven't reflected that yet.

The good news is that there are remaining chances to change minds. Next weekend brings a return trip to No. 4 Northeastern for a third and a fourth game against the Huskies in a 16-day stretch. The Lady Icers play the last of ten games in New England (all in a span of 16 total games) February 10th and 11th against No. 6 Massachusetts. The next home games are February 18th and 19th against Vermont, but by then, the bids to nationals will have already been awarded to the top eight teams in the February 17th ranking. Until that though, there's just one thing left to do.