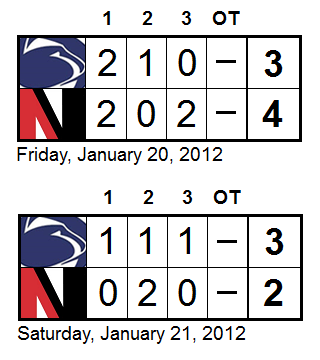 Coach Brandwene didn't need to praise his team's resilience in the aftermath of a second straight Saturday stunner - this time 3-2 over ACHA No. 1 Northeastern - because really, it's quite evident to all observers.

Let's take a step back for a minute before getting into the pair of games against the Huskies. Coming into the weekend, the Lady Icers had fallen behind 1-0 nine times this year. PSU had a 1-7-1 in those games, scoring six unanswered against presently unranked Buffalo after the early deficit on September 30th and rallying to tie rallying to tie NCAA Division III Chatham on November 5th. Data is unavailable for the games against DIII Cortland on November 18th and 19th, but PSU lost both of those games, so it wouldn't hurt my point. Five of those 1-0 holes became 2-0 holes, and the Lady Icers were 0-5-0 in those games.

So when Penn State gave up two goals early Friday night against Northeastern, a perfectly understandable reaction would be to pack it in and hope for better in the next one. Resilient teams, though, don't do that. Jess Desorcie, new to the team but not to its culture, had PSU level by the end of the first period with a pair of goals, one unassisted and one helped by linemates Tess Weaver and Taylor Gross

The momentum carried into a dominant second period in which the favored hosts were outshot 15-4. A 52-second 5-on-3 opportunity went by the wayside, but Denise Rohlik (from Kassidy Augustine and Lindsay Reihl) made up for it by giving the Lady Icers their first lead at 3-2 halfway through the second. It was a lead that would last until the 19:24 mark of the third period - in other words, 36 seconds short of regulation time. A game so close to a win flipped to a loss in rapid fashion when the Huskies' Nicole Fox scored at that point, then added another with six seconds left in regulation.

More adversity. And just to pile on a little bit more, Saturday's game started at 8:45...a.m. Put another way, less than 10 hours after Friday's heartbreaker ended (the officials were late in arriving - perhaps they got more sleep than the team), the top-ranked Huskies again waited on their home ice.

PSU plowed through and jumped out to their own 2-0 lead on goals from Descoresie and Gross (shorthanded), this time with Augustine and Cara Mendelson assisting. But Northeastern again struck quickly, tying the game with Michelle Macchione and Meredith Harclerode goals less than four minutes apart. The even score lasted into the second intermission, bringing on the final gut check to be answered. And answered it was - by the third member of PSU's high-octane scoring line, Weaver. She buried on a 2-on-1 with Gross in the third period to decide the matter and lift the Lady Icers to a third gigantic win in the last three weeks.

With those wins - over No. 5 Rhode Island, DI Sacred Heart and No. 1 Northeastern - in the last six games, look for Penn State, resting at No. 12 for now, to be one of the big movers when the next poll is released this coming Friday. The grind to a spot at nationals doesn't take a break to celebrate though - No. 4 Liberty visits the Ice Pavilion Saturday and Sunday.
Posted by Kyle Rossi at 4:16 PM