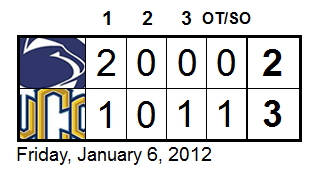 Tommy Olczyk scored both PSU goals, the second of which came on the first power play attempt of the evening. However, it was the Icers' only tally with the advantage against six regulation attempts. That inability to bury the Bronchos when given the opportunity kept the game at 2-1, and UCO made Penn State pay on the last of those tries beyond simply failing to score. Specifically, Rich O'Brien turned the puck over in the neutral zone, leading to a 2-on-1 that Corey Allen finished himself to tie the game at 2-2 with 3:04 remaining. After another 8:04 of eventful but scoreless hockey, Corey Brennan beat P.J. Musico for the only goal of the shootout in the fourth round to clinch the upset.