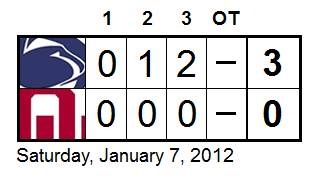 The Icers (15-3-1, 14-2-1 ACHA), behind a big-time shutout from Matt Madrazo, put together a nice bounceback effort in a 3-0 win over No. 8 Oklahoma (17-9-1). After an uneven first period, Dan Meiselman walked out front and scored what would hold up as the game winner 4:41 into the second. Any Sooner notion of duplicating UCO's Friday night comeback was smashed by Chris Cerutti and Taylor Holstrom goals early in the third, as the Icers - contrary to what one would expect playing a third game in four nights - seemed to get stronger as the game went on. Paul Daley recorded his 98th and 99th PSU points in the win.