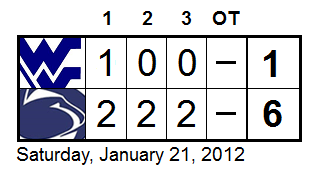 The Icers finished off West Virginia without a loss (this weekend or ever) Saturday afternoon. The following is from the Collegian. I'm ignoring the usual blockquote style due to length.

It was the fifth straight win for the Icers and extended the team’s home win streak this season to 13 in-a-row.

After an impressive 8-0 win Friday night, he start of the game didn’t go according to plan. West Virginia’s Tod Camara scored on the first shot of the game for either team, beating Penn State goalie Matt Madrazo on a breakaway.

From that point on the Icers were in control. Penn State scored six straight goals and outshot West Virginia 36-20.

The Icers didn’t get out of the game unscathed with senior captain Dan Loucks suffering a hip contusion during the second period. Loucks skated back to the bench under his own power, but needed assistance getting back to the locker room for the intermission.

With the Icers top scoring line of Taylor Holstrom, Justin Kirchhevel and Tommy Olczyk, getting a day off, Penn State brought a balanced attack. Different players scored all six of Penn State’s goals.

On special teams the Icers dominated their opposition, killing the only penalty they faced and scoring on all three power play opportunities. Kurt Collins, Josh Daley and Dan Petrick all scored when the Icers had the man advantage.
Posted by Kyle Rossi at 12:45 PM