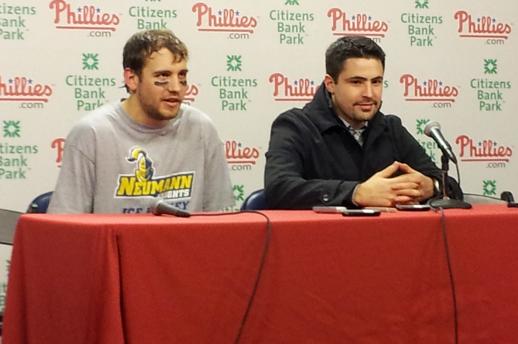 Jordan, two goals for you tonight in a big game like this, does it make it a little extra special considering the circumstances you were playing in?

What did you see on your first one? It seems like you just got the puck down low and just roofed it.

Zalba: I don't know, I closed my eyes really. There was a little bit of an opening, I thought I might as well just take a shot, and the goalie was kind of over anticipating the pass a little bit there, and I just did what I could.

What's it like playing in front of a few thousand people coming from a small school?

Zalba: It's awesome. Your fellow students are there, your peers, and family, and friends. Just for everyone on the team, I know they saw all the people there in the stands and they were just ecstatic right from the get-go. The adrenaline starts pumping, and it's pretty good.

Coach, how long do you think it took them to settle in, taking everything in and kind of getting to work?

Head coach Dominick Dawes: It took a while. I think I was on them quite a bit throughout the game. I think it went in spurts. I think both teams had a hard time just settling the puck down, I thought the puck was kind of bouncing all over the place out there. I just think for both teams, the environment, it's such a unique thing, it's such a special opportunity. It's a once-in-a-lifetime opportunity. So the big thing is to enjoy it. Soak it up and you have fun with it.

Guy [Gadowsky] kind of talked a little bit about getting caught up and doing a little bit more watching. Did you feel the same thing, like you were just caught up in the scene?

Dawes: I did. I think, and Jordan will tell you, I kept saying 'keep it simple.' Let's just dump pucks in, let's keep it simple. Let's not try to do too much, because it seemed like every time each team would make one or two passes, the puck would just start bouncing around like a grenade. So it made it tough in that aspect, but you couldn't ask for a better night.

From a player's perspective, how different was it from playing in the normal league you play in all year?

Zalba: You know, it was cool. It was a little colder obviously, but just being under the lights, you can't really compare it to playing in a normal league game. It's surreal. It's a once-in-a-lifetime opportunity I'll never forget.

Everyone knows Penn State's situation moving up to DI, but were you a little bit motivated to not be shown up by what's still a club team?

Zalba: With our team in there, we want to win every night. It doesn't matter who it is, we played Princeton earlier, and we had full intentions of trying to win the game. We're here to win, do the best we can in our division. So any game we can, it's just a stepping stone to help us be better. And Penn State's a pretty good club team, you can't take them for granted. They're a good team.

Matt Tendler has been playing with a knee injury. What's the progress on his knee?

Jordan, you mentioned the puck bouncing around. Were there other challenges being outside that maybe you didn't anticipate until you got out there?

Zalba: Yeah, when you flip the puck up, it's harder to see for a little bit and then it comes down. But mostly just the puck, whether it's me just not handling the puck or it's...a lot of guys were mentioning that it was a little tougher, it was a lot faster. But I mean, every part of the game is going to be a little different.

With [using] all three goalies as the plan going in, how would you assess them?

Dawes: I thought in their own way, all three played pretty well. I thought Matty Tendler came out and played well, made some big saves. Really, I thought they came out pretty hard and he did his job. Ben Curley, the guy that played second, he's a freshman, that's the first he's really played all year. It's a pretty big-time situation for your first minutes. I think the kid's played two periods all year, he played the second period at Princeton and he played the second period out here. So he's played in two pretty unique atmospheres, and I don't think the guys helped him much in the second period to be honest. Ross, he's coming off a big game, and I thought he did a great job cleaning it up, he made some big saves later on. So I was happy with all three of those guys, I thought they made the saves they needed to make.

Jordan's first goal came with about 10 seconds left in the first period. How big was that?

Now that it's over, what do you feel like this game meant for your program in the big picture moving forward?

Dawes: I think honestly, it means more for our university than it does our program. Just for the university to have you guys here, to get the word out about Neumann here, regionally and locally. The publicity of the whole event I think is good. It draws more attention to Neumann. And for the program too obviously, it helps with a little bit more attention on the program. But I think for our university, it's a big thing. Because it's little old Neumann against big old Penn State. It was a great opportunity for us.

How are you going to prepare for the next game, going back to an indoor rink from the outside?

Zalba: Just take it like every other game. We've played so many games in our career, our whole team, we just have to know that this is a league game, we can't afford to lose, and every win counts. So we just have to go out there and keep it simple and work hard.
Posted by Kyle Rossi at 5:33 AM