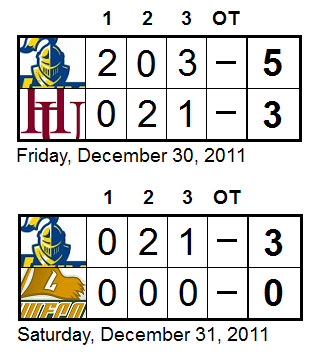 When Neumann arrives at Citizens Bank Park on Wednesday, it will do so as champions.

Okay, so the Pathfinder Bank/Oswego Hockey Classic isn’t the NCAA tournament. Or even the ECAC West tournament. It’s more or less your garden-variety holiday showcase, similar to numerous others around college hockey in late December. However, shutting out a team on their home ice in front of 2,240 of their fans, as NU did to win the title, is always a noteworthy achievement. It becomes much more so when that team is Oswego State, the second-ranked team in the country - and one that hadn’t been blanked in 10 years, since a 5-0 result at the hands of now-Division I RIT.

The final started innocently enough, as a largely defensive affair. Then, shortly after NU’s Steve Gervais opened the scoring 8:20 into the second period with a one-timer from the slot, courtesy of Jordan Zalba’s feed from behind the net, a parade to the Oswego’s penalty box began in earnest. In all, the Lakers committed 12 infractions for 62 minutes of punishment (to just four and eight for Neumann). The eight resulting Knight power plays, five of which were in the third period, both helped NU add to its advantage and hampered OSU’s attempt at a comeback.

Ross MacKinnon, the Frozen Four hero from 2009, recorded the clean sheet on 32 saves. He was named to the all-tournament team headed by MVP Park.

The Knights, now 9-3-0, defeated Hamline 5-3 in the Classic’s opener Friday afternoon behind two goals from Andrew Love (one into an empty net) and three-point efforts from Dave Gervais and Marlon Gardner.

A resilient Hamline squad wouldn’t allow the game to be decided until its closing minutes, despite the Knights’ best efforts to distance themselves early. After Love and Zalba staked the Knights to a two-goal first-period lead, Hamline’s Jordan Van Gilder and Sam Leslie countered in the second period to tie things up through 40 minutes. Dave Gervais thought he might have the winner midway through the third, but the Pipers' Zach Johnson came up with a rebuttal. It was Park who was finally able to score unanswered to seal the win with three minutes remaining.
Posted by Kyle Rossi at 2:22 AM