A Week to Remember 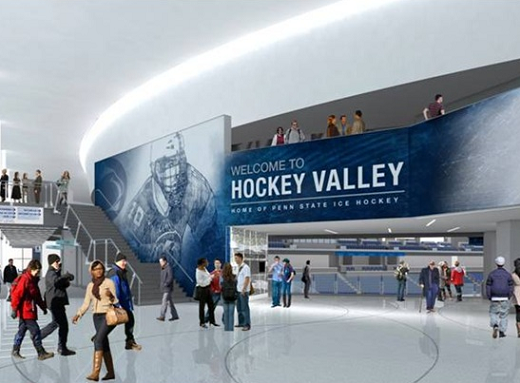 Since Penn State announced the creation of NCAA hockey programs on September 17, 2010, 70 full weeks have passed. Has there been one better than number 70? Here's a quick review of the supreme greatness of the week that was in Penn State hockey, from Saturday, January 14th through Friday, January 20th.

Tess Weaver's goal with 16 seconds remaining in overtime elevated Penn State to its first-ever win against a DI program and the consensus biggest victory in program history. Sara Chroman and newcomer Jess Desorcie also scored for PSU, and Katie Vaughan stopped 26 of 28 in net.

Guy Gadowsky has brought in a lot of great recruits so far. Gardiner, though, is the first to be the property of an NHL team - he was drafted in the third round by the St. Louis Blues in 2010. The Minnesota transfer will join PSU in the fall after a season in the USHL.

The 6,000-seater will break ground in February and will serve as Penn State hockey's first-class venue beginning with the 2013-2014 season. While the approval was all but a certainty given that it's to be financed through a private donation, the brain-melting renderings added a high degree of excitement to the occasion.

Those who believe that hockey was born in Nova Scotia, Canada will be happy to know that the hockey gods work on Atlantic Time, as Penn State's charmed week came to an abrupt close shortly after 11:00 p.m. Friday night (but a symbolic midnight in the maritime provinces). A couple hours after the Icers polished off an 8-0 blowout of West Virginia, the Lady Icers surrendered two goals in the final 36 seconds to fall 4-3 to No. 1 Northeastern.

Of course, the women bounced back less than 12 hours later to upset the Huskies 3-2, so maybe this week will be even better.
Posted by Kyle Rossi at 12:53 PM