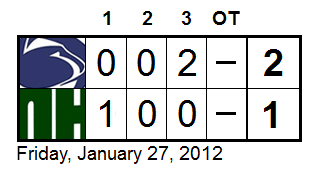 In a chippier-than-anticipated affair, Penn State (20-3-1) used two third period transition goals from Taylor Holstrom to outweigh a Zach Barbis first-period tally for Ohio (21-10-1). Barbis' goal, from in front of a gaping cage and set up by a Michael Schultz feed that caught the defense napping, held up for 34:47 of the game. That frustrating chunk of time was punctuated by missed opportunities and Icers power plays that ended prematurely due to PSU penalties, mostly after whistles (both teams finished without a goal in eight attempts at an advantage). Just as it started to look as if the Bobcats might muddle their way to 1-0 upset, Rich O'Brien's stretch pass found Holstrom streaking in to level the game with 12:09 left. Holstrom again proved dangerous in the open ice just under eight minutes later when he buried the winner at the conclusion of a spectacular end-to-end rush. P.J. Musico turned in a quiet but outstanding effort in goal, stopping 18 of 19 OU attempts.

The two teams will square off again Saturday night at 7:30 p.m. in the Icers' final tilt at Ohio's Bird Arena.