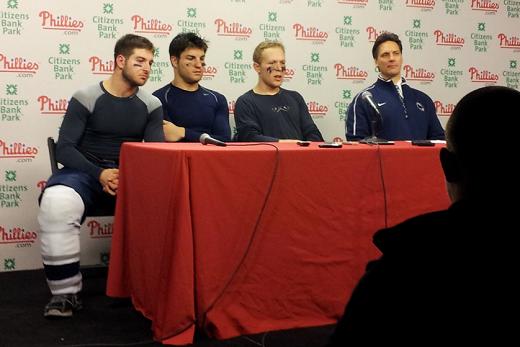 Coach, your penalty kill’s been pretty solid so far this season, but obviously tonight you gave up two goals on the penalty kill, what are your thoughts on that, what do you think went wrong?

Head coach Guy Gadowsky: Well, it’s disappointing, I think we were clicking at 90 percent coming into this. I think it’s something that we all felt pretty good about. They got pucks to the net, the first one was a beautiful move and a great shot. But I think they got pucks to the net, and that’s something we didn’t get done on our power play, and I think that was the difference.

What was it like coming here and playing outside?

Gadowsky: You know what? I loved it, I really did. It was – on the bench, I sort of caught myself just watching. I sort of felt like when I grew up in Edmonton, when I was a kid and you go to the rink, and as a little guy you’d sort of wait for your turn to get on, and all the bigger kids would go on, they might give you a shift every once in a while. It sort of felt like the same thing – I would really love to play. It was a great night, it was a very cool atmosphere, I would’ve loved to have been out there.

Freshman defenseman Brandon Russo: It was an unbelievable experience. Unfortunately we didn’t get the outcome that we wanted, but just being out there on such a big stage. It started to snow at the end, it made you smile, it was surreal.

Senior forward Kurt Collins: Another thing was the conditions. It was kind of cool to play on something you don’t face every day. So it kind of took a little more mental preparation to focus on the ice being a little worse than we’re used to – wind and snow a little bit at the end, so it was really cool to see and an awesome experience.

What can you say about the level of competition that Neumann provided this year? Do you think they’re the best team you’ve played so far?

Gadowsky: Well, they’ve certainly proven it. They’ve won an NCAA Division III championship recently, and I think they’re ranked eighth in the nation right now for Division III. They certainly deserve that. I thought they had some guys – that was a beautiful goal, I can’t remember which one it was. They’re a very good team, and we expected that. But I thought we hung in there. I would like to have another crack at them, but I think they’re a very good hockey team.

Anything in the works for next year in that regard?

Gadowsky: I don’t think so. Next year we’re regulated by NCAA rules and the amount of contests we can play, so it’s a lot easier to do it for this year than for next year.

Obviously you guys have been dominating teams at club D1, and you come up and play a team like Neumann, what can you take away from a game like this?

Russo: It shows what we’re going to be experiencing in the years to come, I think. It was a really good experience to play against a higher-level team than some of the teams we’ve played in the past. The tempo is a lot faster, there’s more hitting, more contact, stronger players. I thought it was a great experience for all the guys and it’s showing what else there is, what the next level’s all about.

How do you guys keep focused and keep wanting to win? I mean, you’ve played two DIII teams, the Winter Classic’s now over, it’s back to ACHA, how do you stay motivated to finish out the season?

Collins: I think it’s just the nature of an athlete. Our competitive drive’s going to keep us going. Our end goal is something we’ve been working for all year, which is the national championship. I think we’re going to keep our eye on the prize and use this loss as a little motivation moving forward to start winning some games.

Taylor, what can you say about coming back, your first game back, how did you feel out there?

Holstrom: It’s nice to be back, be with the guys. Unfortunately, it was the outdoor game, but it felt good. It felt good to be back.

Can you walk me through your goal?

Holstrom: Good shot from the point. Tommy [Olczyk] and I pretty much simultaneously touched it, tipped, and it went behind the goalie.

Russo: It was kind of interesting going out in warmups and kind of feeling it out a little bit. I think the biggest difference from indoors and this rink was the peripheral vision that we had. Looking up ice, it was a little bit harder to see the puck with your peripherals, but as the game went on, as warmups went on, you got used to it.

Taylor, is this your first time playing outside, growing up in California? Do you like it?

Holstrom: Oh yeah, absolutely man, I loved it. Like [Russo] said, it was an unbelievable experience. I don’t know if I’ll ever get a chance again, but it’s definitely something I’ll remember.

What are you guys focusing on going into your games this weekend?

Russo: Definitely work harder and get two Ws coming out of Oklahoma. Definitely do our best to get those two Ws.

Gadowsky: I think our practice this week wasn’t great, and I think you can attribute that to the length. I know Neumann got to play two games beforehand, but sometimes it works differently. Sometimes you come back very refreshed and ready to go. I can’t say that’s the reason at all. I think you can show some rust, and I think we did, but at the same time, we played a very good team. They exploited our rust, put it that way.

How much practice time did you get before this game?

Gadowsky: We had two days.

Are you at all concerned about the emotion of a big event like this and then the quick turnaround, having to play two quality teams in Oklahoma?

Gadowsky: You know what? No, because I think it was Kurt Collins who answered a question very well. I think he said ‘keep your eyes on the prize.’ I think this team all year, their goals have been very well defined about having a great year this year, and Kurt Collins twice now has come out and said he wants to win the championship. And there’s a lot of them that feel that way. He’s a senior, and there’s a lot of people involved in the program where this is the last year in the ACHA and that’s very important to them. I don’t think that being motivated to do as well as we can back in our league is going to be a problem.

Logistically, what’s the schedule for the next couple days getting out to Oklahoma?

Gadowsky: We leave [Thursday] morning, we fly right out of Philadelphia, and check in. I think we’ll arrive sometime in the afternoon, we’ll have dinner, go to bed early, get up in the morning, have a pregame skate, and play at 7:00 at night.

Can you say anything about the goalie performance today?

Gadowsky: Someone asked the question about the differences…I thought I saw both goaltenders losing pucks that were shot from outside that were high. That’s what I thought I saw
Posted by Kyle Rossi at 4:41 AM