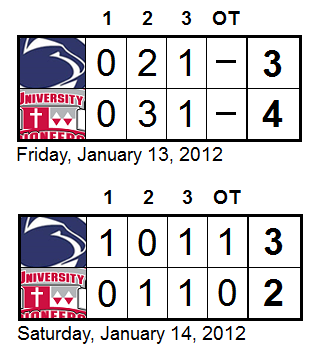 To be sure, PSU's ascendancy isn't official just yet. But a 3-2 overtime triumph over NCAA Division I Sacred Heart Saturday afternoon showed that the Lady Icers - as resilient of a team as you'll find, steeled by ten previous games against NCAA opposition - have no intention of waiting any longer.

The best part? It's tough to call it in upset, despite the difference in sanctioning designation. This one didn't follow the usual upset formulae, including the one where a team hangs around and gets a fluky goal late or the other one where the underdog jumps out to a surprising lead and barely withstands a furious rally. Saturday's game was neither of those things. PSU outshot Sacred Heart 29-28 and never trailed. In fact, the Lady Icers held the lead for all but 23:16 of an overtime game. Sound like a scrappy upstart to you? Me neither.

Sara Chroman gave Penn State an early lead by burying a carom off the end boards that fooled Pioneers goalie Alexius Schutt. After maintaining that tenuous edge through the last half of the first period and most of the second (including through three PSU penalties), SHU leading scorer Nicole Palazzo won the draw immediately after a Lindsay Reihl tripping call and took it in herself to level things with just seven seconds remaining in the second period.

One way to beat a Division I team is to have a Division I-caliber scoring line on your side. PSU decidedly has that in the new Tess Weaver-Jess Desorcie-Taylor Gross alliance. It was "Descoresie" from Gross giving Penn State a 2-1 lead just 15 seconds into the third period - a gigantic goal that stemmed Pioneer momentum and kept the Lady Icers in control of the game. Palazzo's second, with 8:32 remaining, forced overtime.

However, that only set the stage for that line's third member, Weaver, to be the hero on this occasion. With a tie only 16 seconds down the road, she lifted Penn State to victory off of a scramble in front and the rebound of a Desorcie shot. Desorcie very nearly ended the game 3:08 earlier, but she was denied by Schutt on a rare overtime penalty shot after SHU defender Maura Leahy was whistled for throwing her stick.

Twitter reaction from the stopper and half of the defense that combined to hold Sacred Heart to two goals on 28 shots? You got it.

We probably should have seen that something special was in the works after Friday's game, despite a 4-3 setback, since Penn State was able to trade blows with the NCAA foe. After a scoreless first, Desorcie answered Leahy's opening goal within five minutes. Carly Szyszko (who will be in the teammate hall of fame someday if there is such a thing) gave PSU a brief lead late in the second, but it was answered by a barrage of three Pioneer goals in 114 seconds bridging the second and third periods. Desorcie pulled the Lady Icers within one on the power play with 16:11 remaining, but the comeback was left uncompleted. Mary Tonetti, who got the nod in net, made 39 saves.

The Lady Icers, now 6-11-2 overall and 5-3-0 in ACHA competition, will now focus solely on non-varsity competition the rest of the way. Next week, it's ACHA No. 1 Northeastern in Boston, followed by another trip to the Bay State to visit the Huskies on February 3rd and 4th. No. 4 Liberty comes to the Ice Pavilion January 28th and 29th, and a third trip to the Beantown, this time for No. 6 Massachusetts, is February 10th and 11th. Daunting? Maybe. But maybe not quite as much for an NCAA team.
Posted by Kyle Rossi at 11:32 PM