All season long, this inaugural group of Nittany Lions has been pointed towards this moment.

With the NCAA tournament never really in play thanks to the CHA's - thankfully, now temporary - lack of an autobid (only Mercyhurst among league members has proven able to earn an at-large bid) the CHA tournament, which opens this weekend, has taken on the role of an end, both literally and figuratively, and not just a means to one.

That's been the recurring theme from Josh Brandwene all season, whenever he's been asked about his team's goals for this first NCAA season: improve every day, peak for CHAs, and anything can happen in a playoff setting. He's right, and his Nittany Lions will look to capitalize on that puncher's chance that always comes with great goaltending, likely from Nicole Paniccia this weekend, and grinding effort players like Birdie Shaw, Micayla Catanzariti and Shannon Yoxheimer (seriously, don't let the team highs of 14 goals, 16 assists and 30 points fool you, she's outstanding without the puck too). As has been the case all year, limiting the opponents' shot quality, if not volume, and capitalizing on the counterattack will be of paramount importance for a squad looking for a signature win to bookend the NCAA era-opening 5-3 victory at Vermont on October 6th.

One team that knows a little bit about playoff hockey is the Nittany Lions' opponent for the series, RIT. After all, the Tigers join defending CHA champ Robert Morris as the only teams able to claim the most recent edition of a major tournament - RIT won the ECAC West and the NCAA Division III national championship last season prior to elevating to DI this year.

Scott McDonald's charges are quite familiar to Penn State through four meetings this season. Notably, PSU chipped off one of their four league points from the Tigers back on October 26th at the Ice Pavilion. The Nittany Lions, behind Nicole Paniccia's 59 saves and first-period goals from Taylor Gross and Yoxheimer, nearly escaped with a 2-1 win before Tenecia Hiller's floater off of a turnover with 1:29 left in regulation forced a draw.

RIT won the other three games in the season series, the last pair coming just two weekends ago at Ritter Arena, in games that became rather physical. Two notable incidents in that department took place during the Tigers' 4-0 win on February 16th. The first involved PSU junior Jenna Welch, who let fly with a sharp elbow to Erin Zach following the latter's late second period goal, drawing the ire of Jess Paton in reply. The other was a post-whistle battle between dangle queen Hannah Hoenshell and RIT's Danielle Read with 16 seconds left in the game.

The Tigers' starting goaltender, Ali Binnington, returned last weekend for their series at Mercyhurst after missing those PSU games with an upper body injury, so the sophomore with sparkling numbers (2.03 goals against average, 0.925 save percentage) is expected to be the last barrier to Penn State's offensive production. Elsewhere, Hiller and Kim Schlattman lead the senior-laden team with 14 goals each, while defender Kristina Moss and her wicked shot generates a lot of trouble from up high and Zach uses a good degree of jam to create additional problems from near the blue paint.

A Penn State upset would mean that the Nittany Lions are locked in to a semifinal against top seed Mercyhurst next Friday. The Lakers won the right to host the CHA semifinals and final by winning the CHA regular season crown for an incredible 11th straight year, thanks to a 17-3-0 league record. 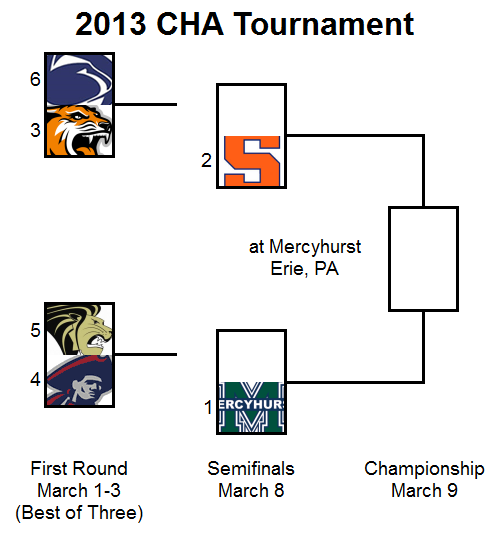 Elsewhere in the CHA tournament this weekend, second-year NCAA program Lindenwood will visit defending champion Robert Morris in the other first-round series, one that features teams trending in opposite directions.

Lindenwood, after beginning their time in DI with a 4-40-1 record in their first 45 games against other DI teams, has gone 5-1-2 since January 26th, obviously an incredible turn in fortune (one that raises the intriguing possibility of a similar tipping point for Penn State next season). Included in the month-long hot streak: wins over every CHA opponent except Mercyhurst, including 2-1 in overtime over Syracuse on Tuesday and a home sweep of RMU two weeks ago, which will certainly have the Colonials salty.

Nicole Hensley, a freshman goaltender and a former teammate of PSU defender Jeanette Bateman with the Colorado Select program, has been in the middle of the surge, as she faces more than 43.5 shots per 60 minutes but only allows 3.59 of them through. The offensively-challenged Lions have found enough to win in recent weeks, hitting that magic number of three goals five times during their current run after doing it just four times all season previous to that. LU's top line of Alison Wickenheiser, Alyssa West and Allysson Arcibal accounts for nearly half of the Lions' goal scoring - 28 of the team's 60 this season.

RMU came into this season as something resembling CHA co-favorites with Mercyhurst, and things started off well enough through December 8th, when the Colonials completed a sweep of the Lakers to climb to 9-3-2 overall and 5-1-0 in the CHA. Since then though, they're just 4-11-1 overall, including 2-11-1 prior to the team's home sweep of Penn State last weekend. The magnitude of the skid is baffling, given the talent level in Moon Township, including goaltender Kristen DiCiocco, the new program wins leader, as well as dynamic defender Jamie Joslin and waves of quality forwards like Rebecca Vint, Kristen Richards, Kelsey Thomas and Thea Imbrogno. Without a doubt, four Colonials wins over the next two weekends would redeem a disappointing season, although they'll have to start with two against a team that took the season series three games to one.

After both the Penn State-RIT and Robert Morris-Lindenwood series are decided, the two winners will head to the Mercyhurst Ice Center next weekend, with the lowest-surviving seed playing the hosts (obviously and as mentioned, that will be PSU, should the Nittany Lions advance), while second-seeded Syracuse will play the other first-round winner in the other semifinal. The winners of the single-elimination semifinal will then meet for the league tournament title.
Posted by Kyle Rossi at 12:02 AM