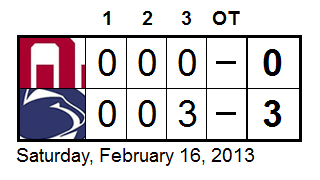 Penn State, in the final Ice Pavilion game ever for the Icers/NCAA men's team, rode a third-period surge aided significantly by a boarding major to Oklahoma's Nic Power, to a 3-0 victory over the Sooners. With the win, PSU improves to 18-15-0 in all games, while remaining 12-13-0 in NCAA games and 10-11-0 against NCAA Division I.

Here's the GoPSUSports.com recap - its incredible depth undoubtedly reflecting the respect the writer has for the tradition built at the closing venue prior to this season - followed by the live blog from the game.


After two scoreless periods, the Penn State men's hockey team tallied three third-period goals as it garnered a 3-0 exhibition victory against the ACHA's Oklahoma Sooners in the team's final game at Greenberg Ice Pavilion. The Nittany Lions competed in front of a sellout crowd for the 14th time this season.

Penn State outshot the Sooners, 51-26, and went 2-for-8 on the power play. Oklahoma went 0-for-4 on the man advantage, while goaltender Colin Fernandes made 48 saves.

After two scoreless periods, Loik tallied the game's first goal at 3:24 of the third. Varley sent a pass to Loik, who skated above the circles near the blue line before sending a shot through traffic for the marker.

Brooks doubled the advantage while the Sooners were defending a five-minute major. Sophomore forward Max Gardiner (Deephaven, Minn.) passed to Brooks, who went around the net before sliding a shot past the goal line. Freshman David Glen (Fort Saskatchewan, Alta.) also collected an assist on the play.

The Nittany Lions needed just 14 seconds to take a 3-0 lead. Freshman defenseman Joseph Lordo (St. Louis, Mo.) sent a pass to Varley at the blue line, where his shot was stopped by Fernandes. The rebound fell to the goaltender's feet, where Longo quickly knocked it in for the goal.